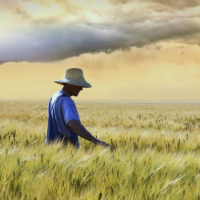 Holy Gospel of Jesus Christ according to Saint Mark 2: 23-28

It happened that one Sabbath day he was taking a walk through the cornfields, and his disciples began to make a path by plucking ears of corn. And the Pharisees said to him, 'Look, why are they doing something on the Sabbath day that is forbidden?' And he replied, 'Have you never read what David did in his time of need when he and his followers were hungry- how he went into the house of God when Abiathar was high priest, and ate the loaves of the offering which only the priests are allowed to eat, and how he also gave some to the men with him?' And he said to them, 'The Sabbath was made for man, not man for the Sabbath; so the Son of man is master even of the Sabbath.'