Youth
Dating and Engaged
Cohabitation: Should we live together?
Relationships

Marriage is one the most important decisions a person can make in life. When one considers the high rate of divorce and the fact that so many dating and engaged couples experienced their own parents, divorce, it´s understandable that many couples feel cautious about making such a commitment. 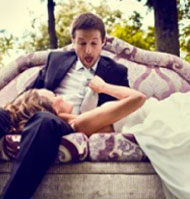 Marriage is one the most important decisions a person can make in life. When one considers the high rate of divorce and the fact that so many dating and engaged couples experienced their own parents’ divorce, it’s understandable that many couples feel cautious about making such a commitment.

Sometimes one partner is eager to get married, while the other is hesitant. The eager one might think, “Maybe we can compromise and try living together for a while. Maybe it will help convince my partner to take the next step.” In other instances, neither partner feels ready for marriage. They may think, “Perhaps we should try living together to see if we’re compatible. As much time as we spend together, we might as well be under the same roof and split the rent. If things don’t work out between us, it’s not like we’ll need a divorce and all that drama. Besides, you really want to get to know a person before you promise you’ll be with them forever.”

It seems logical that living together would offer a good preview of marriage. However, sociologists have discovered that the “expectation of a positive relationship between cohabitation and marital stability . . . has been shattered in recent years by studies conducted in several Western countries.”[2]

Couples who cohabited prior to marriage also have greater marital conflict and poorer communication, and they make more frequent visits to marriage counselors
Women who cohabited before marriage are more than three times as likely as women who did not to cheat on their husbands within marriage.
The U.S. Justice Department found that women who cohabit are sixty-two times more likely to be assaulted by a live-in boyfriend than by a husband.

From the standpoint of marital duration, marital peace, marital fidelity, physical safety, emotional well being, and sexual satisfaction, cohabitation is clearly not a recipe for happiness. Even USA Today reported, “Could this be true love? Test it with courtship, not cohabitation.”

Why do cohabiting couples have higher divorce rates?
If things are running smoothly, cohabiting couples may slide into marriage, thinking, “We haven’t been fighting much lately, and after living together for this long, we sure don’t want to start over with someone else. Why don’t we just make it official?” These couples often find it difficult to explain exactly what marriage is. They go through a big ceremony and go back to what they were doing before. This undermines the meaning of marriage as a covenant that two people make with God. Since they think less of marriage, they are less likely to work tirelessly to preserve it. Moreover, the breakup of a cohabiting couple who has not married can be as wrenching as an actual divorce.
A second reason for the higher divorce rate is the ability of sexual intimacy to bind a couple together emotionally while blinding them to problems in their relationship. The months and years spent prior to one’s marriage should be a time of serious discernment. By having sex during this courtship period, couples hinder their ability to look at each other clearly. The sexual intimacy may even prevent them from seeing that their relationship lacks true intimacy. Imagine that you were engaged but you knew in your heart that you needed to call off the wedding. Consider how much more difficult it would be to break an engagement if you were already sleeping with your fiancé.
A third reason for the higher divorce rate is that cohabiting undermines commitment. If a partner finds enough faults in the other, he or she is free to leave. The desire to enter a “test run” shows a lack of faith in one’s love for each other. On one hand the couple is saying that they desire complete intimacy, but on the other hand they want to leave a way out if their partner does not measure up. This sows seeds of doubt and distrust from the start.
Successful marriages are not the result of a lack of annoying qualities in one’s spouse; they are the result of choosing to love and forgive the other daily, with all his or her imperfections. It is the ability to sacrifice that holds marriages together, not the absence of nuisances. Therefore, the desire to “test drive” a marriage demonstrates a lack of understanding regarding what makes a marriage work.

What Should We Do If We’re Already Living Together?
Step number one is to begin reserving sexual intimacy for marriage. Love is patient, and couples who are confident in their love know that they will have the rest of their lives to enjoy sex. But now is their only time to prepare for marriage and to lay the foundation for the rest of their lives together. Through this time of patient expectation, couples will discover that healthy relationships do not require sex in order to be intimate.
Waiting to share the gift of sex should not be seen as a passive delay of passion but as an active training in faithfulness. After all, don’t you want to know before the wedding if your spouse will be able to resist temptations after the wedding? Many of the virtues that hold marriages together are developed when a couple practices chastity—for example, humility, self-control, patience, and a willingness to sacrifice.
A willingness to forgo sexual intimacy is not only an expression of obedience to the Church. It is also an expression of love for God, who said, “If you love me, you will keep my commandments” (John 14:15), and for your partner, because you are doing what is best for his or her soul. In the Bible, men are encouraged to love their wives as Christ loved the Church, willing to sacrifice in order to present his bride to God “without spot or wrinkle or any such thing, that she might be holy and without blemish” (Eph 5:25–28). No matter what has happened in the past, purity can be regained if a couple turns their hearts to God. To begin this process, they should return to the sacrament of reconciliation.
If a couple does not understand these principles, perhaps they do not understand marriage. Is it just a piece of paper, or is God establishing a supernatural bond—a covenant with the couple that can only be severed by death? On the wedding night, the marital embrace is the visible expression of this invisible union blessed by God.
When a husband and wife become one flesh, their bodies speak the truth: “I am entirely yours.” Sex outside of marriage, on the other hand, is dishonest. No matter what, it cannot say, “I am entirely yours.” Therefore, having sex prior to marriage not a matter of “peeking under the wrapping paper.” It completely misses the point of sex and marriage.

What else should we do?
In addition to practicing chastity, it is best for the couple to cease living together. It is tempting to exaggerate the difficulties of doing this. Some may wonder, “Why move out as long as we stop sleeping together?” For one, the couple remains in the occasion of sin, where they will be far more likely to fall back into the old habits. Second, the couple is guilty of scandal, which means that they are setting a poor example to others.
Without question, it is not easy to submit one’s personal desires in order to do the will of God. But he will abundantly bless you for your willingness to place him at the center of your relationship. Take time each Sunday to go to Mass together, and begin looking into marriage preparation programs in your diocese.
If you are engaged, consider for a moment the gift of your partner. Look how generous God has been with you. When you come to the altar, do you not want to give God a gift in return? Do not come empty handed. Make the sacrifice to keep your engagement pure so that you come to the altar with this gift for him.
Sleeping together and waking up in the same house on a daily basis with a person you love is a gift that should be reserved for marriage. Like every couple, you dream of a lasting love. If you are serious about making this relationship work, save your marriage before it starts and move in after the wedding.