Youth
Dating and Engaged
When Chasity gets frustrating
Chasity 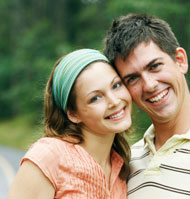 I am so not going into the dance right when it starts, I decided. After all, in my teenage mind, the “cool people” always showed up late to dances, no matter how formal or casual the event was. So, with several minutes to spare, I began walking around the church parking lot. A statue, standing on a wall of cement, caught my eye. I guess prayer can’t hurt or anything, I thought as I climbed up the pedestal. Soon, I was sitting cross-legged in front of the stone statue of Mary, the Mother of God. I began to list off formal petitions and blessings, when everything suddenly changed. Peering through the dark sky towards the face of the statue, I let myself feel the weight I had been trying to ignore.

As the consummate rule-follower, I tried to fulfill certain standards of purity in my life. No provocative dancing, no inappropriate outfits, no impure relationships. I had signed chastity pledges, written love letters to my future husband, and was seen at school as one of the “good girls.” Yet, despite all of these worthwhile exterior practices, I was dissatisfied. Now, sitting in a parking lot before a dance, I silently began to let my frustrations tumble out: So, Mary, you know about all of the times I’ve fallen into temptations against chastity lately? Entertaining impure thoughts, not seeking chastity, and pursuing desires that are inappropriate? I know that I’m supposed to “strive for purity,” and not give into these temptations, but I’m weak. I fall, and I feel that what you and God are asking of me is a bit much. So I’m gonna need some supernatural help. Okay? ‘Cause I really can’t do this whole chastity thing on my own. As I dumped out my problems, I began to feel a little lighter. Eventually, I walked into the nearby dance, and did not dwell too much on the time I spent outside before the dance. Still, those honest prayers in the parking lot really impacted my life. In the past, chastity had seemed like a fairly constant battle. Following my mental list of “rules,” I would try to focus on overcoming any kind of temptation that I could find, in order to be a purer woman. However, while having standards and overcoming temptations was good, I started to shift my focus. Instead of looking at life negatively, and seeing how I was constantly failing in my attempts to be chaste, I began asking for divine help more often. I renewed my devotion to St. Joseph, and invoked his intercession daily. As part of this devotion, I wore a “Chord of St. Joseph” underneath my clothes, a practice that hearkens back to the 17th century. This was a physical reminder of my commitment to prayer and chastity.

Along with shifting my focus in prayer, I also changed my focus in how I viewed other people. Instead of looking at others as potential temptations to lust and impurity, I began trying to focus on loving all the people I met as Christ Himself. As I strove to love other people more, and thought about my struggles and failures less, chastity started becoming much more natural to me. Instead of getting discouraged in my falls, I lived with more hope as I tried to love others better each day. In the years since that fateful night in the parking lot, I have continued to grow more in hope and love. Yes, I still fail. I still make tons of mistakes, and I do not always love people as I should. Yet, by focusing on honest, regular prayer and by trying to love other people more each day it becomes easier to live chastely in joyful hope, and not succumb to discouragement and frustration.