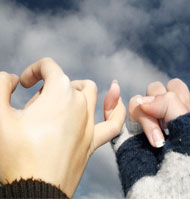 Professor Halperin emphasizes that it is necessary to "teach to avoid promiscuity and promote fidelity", and recognizes that the drastic change of sexual behaviors in Zimbabwe "has received help from training projects promoted by churches".
The scientific evidence does not fail to endorse the line proposed by Pope Benedict XVI to end aids, especially in Africa, a continent ravaged by this sexually transmitted disease. The last of the findings has been provided by a study by the prestigious Harvard University which states that responsible sexual behavior and fidelity to their spouse have been factors that have determined a drastic decline in the aids epidemic, in Zimbabwe.
Sectors of the international community and mass media jumped in protests against Benedict XVI in 2009. The Holy Father made a pastoral trip to the black continent, on the plane that took him to Cameroon, said that the Church's position is that the problem of aids.

It cannot be solved simply by distributing condoms: on the contrary, there is a risk of increasing the problem.
In 2009 Harvard already gave the reason to the Bishop of Rome. On that occasion, Edward Green, the university's top aids expert, said there is "a relationship between greater availability of condoms and a higher rate of Aids contagion." In this way, the scientist endorsed the pontiff's words.

The figures speak: more fidelity, fewer aids
Harvard reconfirms what is not a secret but many want to make a deaf ear. Explains in his latest research Daniel Halperin, a researcher in the Department for Global Health and population of the Population of that American University, which since 1998 studies the social dynamics that cause the dissemination of diseases of sexual transmission in developing countries, that is, what is most affected by the scourge of AIDS, says Zenit.
The ten-year trend is evident: from 1997 to 2007 the rate of infection among the adult population has declined from 29 to 16 percent. After his investigation, Halperin has no doubt: the sudden and clear decline in the incidence of aids has advanced with "reducing risky behaviors, such as relationships outside marriage, with prostitutes and sporadic."
Halperin has used statistical data and field analysis, such as interviews and focus groups, which have allowed him to collect testimonies among people who belong to the poorest social groups.
The study, published in PloSMedicine.org, has been funded by the U.S. Agency for International Development, of which it has been a Halperin counselor, and by the United Nations Population and Development Fund.

The Holy See values it positively
The Vatican newspaper L´Osservatore Romano positively valued the study of Halperin by giving the news in its Italian edition of February 26: "With This study, said the rotary-Halperin promotes a serious and honest reflection on the policies so far adopted by the major aids agencies in the developing countries. "
According to the study, it is clear that the drastic change in sexual behaviors of the Zimbabwean population "has been aided by prevention programs in the media and by church promoted training projects."
A few years ago Halperin had wondered how the "most significant prevention policies may have been made so far based on evidence that is extremely weak", the inefficacy of condoms.
Halperin concludes that is necessary to "teach to avoid promiscuity and promote fidelity", supporting initiatives that seek to build in the society affected by aid a new culture. Pope Benedict XVI himself once affirmed the need to promote a "humanization of sexuality".