Featured
articles
Pope's friend and highest-ranking layman in the Vatican explains the synod's challenge
Guzmán Carriquiry: The challenge of the synod and Catholics around the world is to launch a new and great evangelizing mission that embraces the marriages of the world, in the situation they encounter. 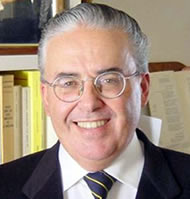 Guzmán Carriquiry is the vice-President of the Pontifical Commission for Latin America at the Vatican and, as such, the highest-ranking layman in the Curia. Uruguayan, he has worked in the Holy See for more than 40 years and has been dedicated to serving the church, collaborating with several pontiffs. Now, with the Synod of bishops underway, it explains the challenge that this House has in which the world has set its eyes.

In the Synod for the Family program, which has begun transmitting live EWTN from Rome in Spanish, English, and German, Carriquiry said that "we cannot stay in the lament that all past time was better or finger-marking the miseries that are living today in the marriage".

With 44 years married, 4 children and ten grandchildren, Professor Guzmán Carriquiry said that the challenge of the synod and Catholics around the world consists of "launching a new and great evangelizing mission that embraces the marriages of the world, in the situation that are, to break prejudices and resistances and reach the hearts of families with the experience of beauty founded on the Gospel of Christ because only beauty provokes follow-up".

In the program, Carriquiry recalled that "the future of the world is played in the bosom of families, in the simplest and every day. There are at stake the primordial affections of the person as a gift, those capital human relationships that are fatherhood, motherhood, nuptiality, fraternity, which are the different faces of God's love".

"If the pope has decided to have in October last year an extraordinary synod to discern the present situation of the family, more threatened than ever, and now this synod to reflect on the family in all its truth and its beauty, is because the Holy Father places the family as a fundamental priority of the Church mission ".

"In recent months at all Wednesday hearings here at St. Peter's Square the pope has been developing the issue of marriage and family, he did much in the Philippines, in Ecuador, Paraguay and Bolivia; and recently in Cuba and more in the United States because we had in (Philadelphia) The World Meeting of Families, "he said.

Guzmán Carriquiry explained later that Pope Francis is aware of the crisis that the family currently faces in the whole world: "He said it in the United States, never so threatened by ideological colonization that in the political, economic power, they tend to disintegrate the Marriage and the family".

Among the problems facing families are the high percentages of divorces, desegregations of marriages. The pope also insists on how it costs young people to undertake lasting, consistent commitments, where their lives are put at stake. Moreover, abortion everywhere is proving not only an attack on the nascent life but a deficit of hope".

"The family is getting more and more disaggregated. How difficult it is to share the table with family, to be with family, to pray with family! The global culture of relativism, permissive, consumerism, selfishness, all that certainly impacts".

In the face of this complicated reality, Carriquiry continued, "The Pope commands all Catholics to go to the streets, to the economic and spiritual peripheries."

It is also important to have the help of the priests and bishops, who come out "from the ecclesiastical precincts and dress the families that are a domestic church. They have to get a lot closer to sustaining that Christian life in the family".

We need, he said, "sheep-smelling shepherds and the perfume of Christ".

What can be expected from the synod?

Guzmán Carriquiry said on this subject that "the Pope hopes and trusts that the meeting of this Assembly of the World Synod of Bishops on the family is above all like a cenacle of prayer entrusted to the grace of the Holy Spirit that passes through the collegiality of the Bishops  Around Peter's successor".

The synod, reaffirmed by following what was said yesterday by the Holy Father, "is not a kind of Parliament of the Church. It is not a deliberative order, it does not make decisions, it assists the Pope in his ministry".

On the pontiff's need to hear the various experiences of pastors from around the world, Carriquiry said that in this way one can know "what the Holy Spirit is saying to the church and the churches, in their different places. The church is one but at the same time it expresses a plurality of ways and forms through the different places where it fulfills its mission".

"It is a faith, charity, the Universal call to Holiness, a mission, and yet there is a plurality of expressions of grace that Christians live", he added.

The Vice-President of the Pontifical Commission for Latin America later recalled a phrase from St. John Paul II in the document Familiaris Consortio in which he affirms that "marriage and family are privileged places to live and guard the love of God".

To conclude, Carriquiry made a strong call to pray for Francis and the Synod: "One of the things I want to ask is that please let us forget all of us, all the laity, the families, to pray day by day for the Pope and for the Holy Spirit to work hard in the Synod of the bishops and that shine the truth and the beauty of marriage and family, and that new impetus is reinvigorated".