Featured
articles
The Ouiji board is a real danger
The American film of Ouija Terror, directed by Stiles White, arrives at the cinemas. 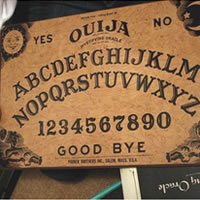 The American film of Ouija Terror, directed by Stiles White, arrives at the cinemas. It is the fictitious story of teenagers who play with this famous board divination, presented as a game, and awaken an evil dark body, demons, who will try to destroy them.

The movie cost 5 million, 000 and has already raised 68 million. It premiered in the U.S. on October 24th and although film critics were very it, young people and teenagers loved it: just in time for a scary time on Halloween.

One might think that the film, like so many other horror stories, should have an educational value, that it would teach that playing with the occult is dangerous, that evil exists and you should not fool around with it.

But the truth is that the film was financed in part by the American Toys company Hasbro, which is also the producer and marketer of official Ouija boards, such as the film, which reported the Daily Mail on December 1, in England are selling like doughnuts, and they promise to be the fashionable Christmas present for this year.

Thus, the film, instead of teaching the young man to be prudent, seduces with the idea of playing with the fire and surviving it.

That has always been the charm of the Ouija board with the teenagers. Adolescent psychology wants to prove its limits, get out of the allowed, prove to society that he is different, show the group of other teenagers that he is courageous, risky... adult! This is demonstrated by "Rites of passage", with doing things forbidden, dangerous… that includes the Ouija board.

An invention of the XIX century
the Ouija (it unites the words "oui" and "ja", meaning "yes" in French and German) was born in the XIX century in the United States in the middle of the fashion of Spiritism, pretending to communicate not with demons but with the spirits of deceased people, to be possible, loved ones.

It includes a pointer that supposedly moves alone (though supported by the practitioners' finger) by a board with the numbers from 0 to 9, the letters of the alphabet, and the words Yes, no, and goodbye. In addition to the XIX century, it lived another epoch of great diffusion in the very alternative years 60.

Skeptics and their nuances the
Daily Mail gathers the opinions of two skeptical personalities with the paranormal. The anti-paranormal investigator James Randi made sessions of Ouija covering the eyes to the participants: the pointer was then incapable of forming coherent words, it was blinded by the board. It would show that it is only the participants that form the words as long as they can see the letters.

The professor of psychology of the Pace University of new York Terence Hines, considers that the users are the ones that move the pointer with the finger and form the words, but that they can do it in an unconscious way, with a subconscious control, as sleepwalking walks. So they think (mistakenly) that there is "another presence" that points to the letters and numbers.

The experience of the exorcists
but regardless of all these sociological and psychological considerations, the experience of the Catholic exorcists and also of the Protestant clergy, is that when a person invokes "presences" (although he believes that they are Spirits of loved ones already dead, or deceased in general) there is real risk that someone comes: demons.

The Daily Mail collects the disdainful opinion of the owner of the London Esoteric Bookshop Treadwell, Christina Oakley Harrington, who says that the Ouija did not begin to associate popularly with the demonic-as the new movie does-up to 1973 and that the fault had that year the film The Exorcist, based on the novel of the Catholic writer William Peter Blatty.

At the beginning of The Exorcist, the 1973 film, Regan teaches his mother how to play the Ouija board and contact a certain "Captain Howdy".

In the book and the film-and in the real case in which they were inspired-the adolescent victim contacted the occult through the Ouija... And then it's clear that whoever acted there was the demon.

"Once you say that something serves to woo evil spirits, you end up with the church involved," laments the esoteric booklet (which certainly makes good money selling Ouija boards).

The British newspaper recovers statements by Father Anthony Hayne, a retired Catholic priest and English exorcist, who says that several of the teenagers who attended in the past "had used Ouija boards and had let the darkness into their lives."

Also Tom Willis, Anglican cleric who responsible of liberation issues in the Anglican Archdiocese of York for decades, recalls that in the years 60 was especially numerous evidence of people who ended up in psychiatric hospitals Mentally affected by what lived with the Ouija.

Willis points out that the "force" that speaks through the Ouija board "can simulate being your granny by contacting you, but it could be something evil that suddenly gives you bad advice."

In Religion In Freedom we have collected numerous testimonies of people who went into the esoteric and demonic world through the Ouija board, although many times took years to realize its effects.

Jesús García, author of the Book of testimonies We are back, interviewed Guillermo Ortea, a family father who went into the demonic through the Ouija board, which he played many times between 13 and 18 years. Although he did not play anymore, he understood that he had lived under the influence of the evil throughout his life and that it also affected his daughter. This disturbing story (and then liberating) is explained with details here: Http://goo.gl/olu4xP

On the occasion of his research for his book so he beats the demon, the writer José María Zavala told the case that he told in the first person a man affected by the demonic after being implicated in the game of the Ouija. You can read in detail here: http://goo.gl/N8slVo

The Exorcist of the Diocese of Cartagena, Murcia began to perform this ministry because he visited prisons and realized that many prisoners practiced Ouija and felt enslaved by evil, unable to change and leave the bad life. "I found myself there with boys who had played with Spiritism, esoteric or had made Satanic pacts. They told Me that they could not change, that everything went wrong because they belonged to the demon, that they were hooked...". Leaving the esoteric is part of the process to regain personal freedom, to be a free man. Explains it here: Http://goo.gl/8al9ZX

The 13TV chain published in February 2013 in the program "Uncovered" the story of Mary, a woman victim of demonic activity that attends Fernando Armenteros, The Exorcist of the Diocese of Alcalá de Henares. "The day I did the Ouija, something happened that I noticed was out of the ordinary. The hand he was wearing began to tremble in the same way as the convulsions that have been left me since then and I noticed that something had gone in. In my life began to twist everything, I began to be sick in a repetitive way. Look for a priest and he said he had something and he was going to pray. That day was the happiest of my life". You can read this story here: Http://goo.gl/gmQuaQ

J. Ramón, Spaniard born in 1973, gave his testimony To Religion in Freedom, adding that he had participated in more than 100 sessions of Ouija and many other esoteric and new era activities: Http://goo.gl/uOlmcy

Abigail, a Chilean girl, explains how in her adolescence full of sadness, she turned to the "Gothic" (sinister) and the Ouija culture, and how she came out of there: http://goo.gl/q4g1zd

The Catechism of the Catholic Church states:

"All forms of divination must be rejected: the recourse to Satan or the demons, the evocation of the dead, and other practices that are mistakenly supposed to "reveal" the future. The consultation of horoscopes, astrology, palmistry, the interpretation of omens and luck, the phenomena of vision, the recourse to "mediums" enclose a will to power over time, history and, finally, men, at the same time as a desire to gain the protection of hidden powers. They are in contradiction with honor and respect, mingled with loving fear, that we owe only to God". (2115-2116)