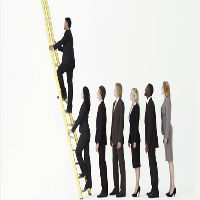 The leader is followed not because he has formal command power, but because he has the power of summons, he radiates confidence and security in himself. Of course, some people come to positions of power precisely because of that: leaders. Others also -the less- gain leadership once in charge of authority, because of the way they use formal power.
But some people cannot make this distinction, perhaps they have not even heard of it. They want to be recognized as leaders when they are not, and do not understand why being known, admired, highlighted in their midst (especially in the political) are not seen or treated as leaders. They can be obeyed, but not followed. They can be respected, but not loved.

The leader is respected, admired, but also esteemed, listened to, followed: "Wherever you think we should go, we'll be there with you." "Whatever you tell me is the truth, I believe you, for I trust you."
The lesson is simple: being powerful can be learned, for that is the praxis of politics, the Machiavellianism, which can work, depending on many other factors. But to be a leader has another way, beginning with the example, with personal behavior and, above all, if you want to be followed, with respect, support and encouragement to other people, those who already recognize or recognize as a leader.

Leadership is won, and it is not easy at all, also with something essential: the congruence between saying, asking and doing and giving. A true leader is authentic, reliable. The greatest leader of the World, Jesus of Nazareth, showed the best credentials of leadership, so it will be until the end of history.

There is something else, a leader can pursue values or ant values. It is true, there are leaders for good and also for evil, and even for God or the demon, and in general, his followers will have the same behavior and interests, that's why they like them.

Some leaders are also followed by their great ability to deceive, true, and of those surplus examples, by moving people to false ideals or utopian dreams. They have a false congruence. In general, and by not getting the promised results, they lose their quality of leadership and are abandoned.

Examples of personal leadership in history and the world are more than abundant. You should know their lives and their works. Learn how they gained their leadership, which is not sudden, and then how they were consolidating their leadership and sometimes how they have lost it.

There are two types of interesting leadership: the leaders of thought and those of acting. The first ones create causes and ideals, the seconds lead the people to make them a reality, to the action. Some do two things.
There is a special type of leadership, that of the so-called "natural leader", who does not have to learn that trade, because it practices what a leader does. It is the one that has what is called "charisma" (vulgar: "Angel"). And the charisma is not learned, it is or is not.

Does Anyone Want to be a true, true leader of good causes? He has much to learn, much to ponder and much to do for others. You should also keep in mind that leading good causes generates enemies.

Leaders are not named, chosen, followed. The preaching of the good causes, the congruence, the example, and the constant concern -turned into the occupation- by the people who follow him.
The leader is not designated, he is chosen; so, we can say: Do you want to be a good leader? Do you want to be one of the best causes and values? Earn it!