Featured
articles
Disconnected Society: 15 Theses about our time
The roots of all the problems of our time are the loss of the notion of good and interest in seeking the truth. 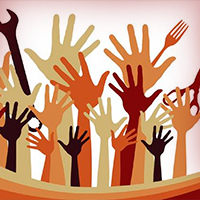 1. The roots of all the problems of our time are the loss of the notion of good and interest in seeking the truth.

2. Both have two causes related to the same dissociation phenomenon. A religious, the other philosophical.

3. The religious cause is the forgetfulness of God, his contempt, or his reduction to a human idol. Ignorance of religious culture is one of its secular consequences.

4. The philosophical cause is the destruction of the objective reason, and with it of the cultural tradition and the blinding of its sources.

5. From the extraordinary ethical-philosophical construction of the antiquity Greco to the effort unmeasured by the primacy or exclusivity of reason, everything is damaged, so much so that if the religious culture has disappeared from the public school the Humanities, they've even made it to a greater extent. And it is that between one and the other there is a strong background relationship. The disappearance of religious sense has not been accompanied by a growth of rationality, but an extraordinary increase in the dark world of superstitions.  Possibly MacIntyre in after virtue has been who better and before (1984) explained why.

6. The loss of religious sense has been defined as secularization. In reality, secularization is the religious manifestation of a much broader process: the delinking, which has affected, in a very variable measure according to each country, the whole of the Western society, with special intensity in Europe, with a great Speed in Spain, and in a devastating way in Catalonia.

7. The disconnected culture is shaped by the convergence of ideas that have an emerging origin in the eighteenth century, but that emerged with strength and as mass culture from the sixties of the twentieth century. It is necessary to carefully follow Taylor and his Sources of Self to see how this cultural conception ends up, which does not arise from any explicit purpose, from any holistic concept, or even from a process of rationalization. It is the result of the progressive sliding, which Freud already denounced in 1915: "Wherever the community refrains from all disapproval, the perverse impulses cease also the juggling".

8. The delinking supports the claim that only personal fulfillment is possible employing the satisfaction of desire. No personal, intimate, public, social or institutional commitment or bond; no duty, obligation; No norm, tradition, philosophical belief, religious faith, can limit or deny the satisfaction of individual desire, source of realization and sign of personal autonomy.

9. If the link limits or makes that realization impossible, it must be transformed to make it adaptive, weak, and if it is not possible it must be destroyed.

10. It has been neglected the evidence that the human being is done precisely concerning their bonds, achieved voluntarily or by birth, which begins at the most elementary as is the commitment to their corporeity. It is the strong bonds that contribute the human identity, without them, or in its provisionally and accidentality, it produces the alienation, the addition and the dependence of the emotivity, passional desires. It is the end of the foundation of Western culture in what it establishes as a process of personalization, and the life of the polis as a strong commitment to the common good.

11. Without ties, We are born every day, and so we are forced to an impossible effort of everyday reconstruction of the horizons of meaning, or, what in practice is easier, to dispense with all sense. This last dynamic favors alienation.

12. The current generations of young people and adolescents show better than anyone else this attitude because they are the first heirs of the society disconnected in its fullness. Parents still keep, well that wrong, the footprint, little or much, of another culture, the fruit of Western civilization based on the bond.

13. The links have changed over time by rearranging their hierarchies, but always under the common denominator of their existence in the field of objective reason. The human being is made by the bond and in the bond. From Aristotle, we know it reasonably.

14. We do not know another model because there is no other viable model. There can be No accomplished person and a cohesive society if the bonds are only sustained by the subjective reason of the desire. Good is what I want. Of the ethical commitment to the Polis, to the commitment and Christian Communion, the Fraternity of the French Revolution, the categorical imperative Kantian: The traditionalist, Conservative, Marxist conception, community personalism, how Unitarianism. The fundamental trunk of our moral and political philosophy is based on the bond, because is an expression of human nature.

15. Even the liberal formulation of Adam Smith is part and maintains strong linkage, knows no other, does not conceive another. It has been the subsequent evolution, surely by the dynamics inherent to its ontology that liberalism in its various versions, Conservative, neoliberal, social, and in a particularly intense way since the contributions of Rawls and Rorty, liberalism has become the political alibi for the untying. But even in this case, there are minority currents in its bosom, such as Raz's perfectionist liberalism, which maintains the importation of the bond born of a certain customary practice fruit of a culture of objective reason.