Featured
articles
The rosary: the best of blows against the enemy
Experience dictates that there is nothing so subversive or as revolutionary today as praying the Rosary, nor anything as beneficial to the spirit. 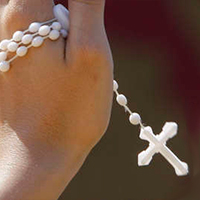 On his last trip to England to play in the Master Tennis Cup among the best players in the world, Juan Martin del Potro had his wallet stolen; in it, he wore a very special rosary that Pope Francis had given him at the end of a general audience last May. While it is true that the loss of that precious gift of the Pope is irreparable, he may have been able to buy another one somewhere in London to continue to take him everywhere, just as he had done with the previous one.

I try to do the same as the great star of tennis and the thing is not as easy as I imagined, and with that, I do not mean to emulate one of the most powerful drives of the circuit but to buy a rosary in one of the most renowned shopping centers in our country; Although in this case, it is not the famous Harrods department store, I assume that I will not leave your premises without a simple and humble rosary.

I ask in Information and I immediately perceive how the young lady who attends me is seized by a healthy excitement: "finally a question with substance, something that can give emotion to the morning!" he seems to say with his gaze. She hesitates a few moments and, before giving up, asks for assistance from another partner. A twinkle of imagination on the part of the employee lets me glimpse a ray of hope: "Maybe you can find what you are looking for in Souvenirs & Tourism," he replies with assertiveness, taking care not to designate the object in question aloud. He calls and smiles at me professionally. Not everything is lost: a plant below I can find it. Immediately I go to where he has indicated to me again to give my explanations to the Plant Manager who, after looking at me as if wearing a top hat, including rabbit, tells me to follow her. Endless fusses and zigzags go through a dense jungle of consumer goods until you arrive in front of a glazed display stand flanked by a hodgepodge of swords, ceramics, fans, and embossed knives; the employee turns on her heels and spits with the joy of the one who has just solved sudoku: "here you are a damascene rosary from Toledo! It is the only thing that has come to us".

This simple anecdote is but the sheer reflection of the luck that has now lived one of our most popular prayers. This is a conclusive testimony of, nothing more and nothing less, the place we have assigned to the Rosary in our day.
The department stores, oracles of our pagan society, have once again precisely pointed out the undeveloped course of our collective destiny; it is only necessary to pay due attention to any of its pythons to save us pages and pages of reading on social, economic and religious junctures.

The Rosary has been reduced in our lives to the slam slabs of religious practice, to become considered an archetype of what our past was. Today, this prayer is seen as outdated, unbecoming of modernity; at best, as something suitable for the elderly.

Nothing is further from reality. The Rosary is an extremely important prayer for those who believe in God. As we pray the Rosary, we repeat various prayers again and again to establish an area of ​​piety, of quiet meditation and resting invocation, and to remain active in it. To pray like this, said Romano Guardini, one of the greatest humanists of the past century, requires loving patience, like that of someone who enters into an exalted reality and does not give up until he knows it closely and makes it his home. In the same way that it is repeated more than thirty times "Et in terra pax hominibus bonae voluntatis" in the Gloria of the great Mass in B minor Johann Sebastian Bach to submerge us in a peace sphere or certain verses in the compositions of Garcia Lorca or Lope de Vega to introduce us into a poetic field, the creative repetition in the Rosary creates us an environment of welcome in the divine life, at the same time that it favors the desire for an ever fuller configuration with Christ, true "program" of the Christian life.

The first difficulty we should overcome if we want to get out of this vicious circle and be able to take advantage of the greatness of this prayer forever would be to overcome human respect, that is, the pressure of widespread opinion, including our own. Romano Guardini gave us an example of this, he did not hesitate to defend the profound value of the prayer of the Rosary against those who despised it as a prayer of his uneducated masses. As a result of this love and commitment to the study of popular prayers, the prestigious research journal Jahrbuch Liturgiewissenschaft excluded him from his collaboration by not recognizing prominent representatives of the liturgical movement high spiritual quality of these traditional forms of prayer.

Experience dictates that there is nothing so subversive or as revolutionary today as praying the rosary, nor anything as beneficial to the spirit. We should not be concerned about difficulties, it is substantial to the Christian experience not to be afraid. All our efforts and sacrifices will be small compared to the immense gains we will receive. Devotion to the rosary will lead us directly to humility, the most powerful weapon for all the poor in spirit.
Charles Baudelaire said that the Rosary is the prayer available to everyone. Catholics know that the Rosary is a compendium of the main moments of the life of Jesus that is accompanied by the recitation of Hail Marys and Our Fathers. In this simple prayer, we can find Everything, whatever the time and place where we are.

Let's list without fear the beads of the rosary, all of us who recognize ourselves as Catholics until we turn it into something as habitual as the use of a belt or a handkerchief. Let us learn the lesson of Del Potro, who not only has the fastest driver of the circuit but also has the rosary: the best of the blows against the Enemy.