Featured
articles
The harmony between John Paul II and the young
Why was John Paul II so loved by the youth? The answer is: because they understood. And, as a consequence, they loved him. 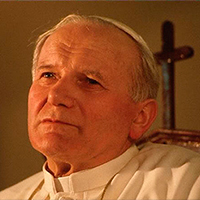