Featured
articles
Let's go to mass
Yes, we go to mass but guests from an app that can be used on computers and mobile devices with access to Google and Facebook. A project of young Uruguayans. 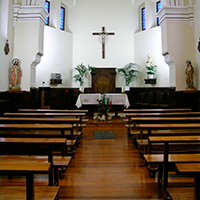 This is reported by the Department of Communication of the Episcopal Conference of Uruguay:
"Go to Mass" is an application that allows the user to detect the parishes and other places of the church near their location, along with the mass schedules in each one. It also automatically recommends where to go, depending on the distance and the closest in time to the beginning of the mass.
The information of the parishes and other places of "go to Mass" is created and maintained by its user community, allowing always to have updated and verified schedules.
The only thing that is needed to be part of the community of collaborators is to have a Google or Facebook account, being enabled as well for the recommendation of new places and schedules around the world.
In the future the application may also report on other types of activities in each parish, such as holidays and solemnities, days of prayer, processions, etc.
The project "Go to Mass" is a creation of the young Rodrigo Pérez and Pablo Sánchez, and arose from the need to know where and when Mass is celebrated in the places or moments when a parishioner wants to go to mass. Many times you miss the opportunity to live the Eucharist for being away from known places or for not arriving for problems of time and not knowing where in another place, near the place where you are at that moment, another mass begins, in a short time.
The aim of the project is to provide a solution to this need using the technology and power of the community. The technology for easy access to information from anywhere, in a simple and fast way. The community to keep updated, correct and varied information of schedules and places of mass.
To begin with, the creators of this app, entered the parishes of Montevideo with their schedules, but aspire to extend service to the whole country and even out of the country so that the app can be used when you are on vacation.

How to download?
Enter http://www.vamosamisa.com
and these who are, ask the people.
He added information about the protagonists, Adriana Porteiro, head of the press office of the Uruguayan Episcopal Conference:
"Pablo Sanchez is 24 years old. He studied business administration at the University of the Republic and Marketing at the ORT Private university. He is an assistant at the Salesian Alumni Centre and recently worked as a catechist at the Salesians' College in the city of La Costa (Canelones).
Pablo participated in the World Youth Day in Rio, together with a group of young Salesians from the Juan XXIII Institute in Montevideo. When he returned to Uruguay from that great moment of faith, as the WYD described, he felt seized by a certain feeling of "guilt" for not developing any apostolate at that time of his life after having collaborated for a long time in the Salesian oratorios. It was then that he decided to look for a task in his area of specialization, that he had a pastoral paw. Beyond the work that I can do as a professional, I decided to always maintain an apostolate, he says. It was in those days that he read a tweet of the former Rector major of the Salesians, Pascual Chávez, in which he asked his brothers to approach social networks because it is the area where young people spend most of the time. The cell phone is already an extension of the body, says Paul. It was so that he commented on his concerns to a friend who put him in contact with Rodrigo Pérez, who was working on the first drafts of the app go to Mass.
Paul confessed that at first there was something that was gnashing him of the initiative, he did not want an application of Eucharistic consumption because it is important to have a permanent community. Therefore, we clarify that this application is advisable for when you are on vacation, travel or moving, but not for permanent use, he points out.
Rodrigo is also 24 years old and studies computer engineering at the University of the Republic. It is linked to the parishes of Bethlehem and Santa Bernadette of Montevideo. When Vacacionaba in an area away from the Balneario Parque del Plata (Canelones), "was coming on Sunday, I wanted to go to mass and did not know where to go, what parish I was closest to... I lit the lamp", he says. So Rodrigo started with the first drafts of the application and, when he had a stable version, he called a group of friends to collaborate with him. It is at this time that he meets Paul, who coordinated the work of this group of young people and contributed the design. "The computers we see that the application works, we do not care if it looks cute, so it is very important the complement with the designer", he notes.