Featured
articles
Confession as a continual baptism
Two indestructible certainties give meaning to all my existence: God loves me, and he loves every human being 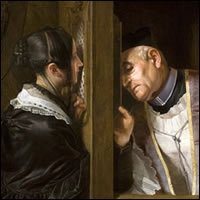 God is a father. That's why he knows every one of his children very well. He loves us from all eternity. He offers his forgiveness with an infinite tenderness. He's sending us his son. He rescues us from sin. It makes us, with baptism, members of the church.

Human beings, however, are wounded by a weakness that haunts us continually. Baptism cleans the original guilt, but along the way the Temptations abound. World, demon and flesh threaten us. If we open the door to evil, we sin.

That's why God offers us new opportunities. After sin, the gates of Mercy remain open. Every day is a new opportunity to go home. Just let us forgive.

In the "dialogue" of Saint Catherine of Siena we find a text that reflects these ideas in an amazing way, considering the sacrament of penance as a "continuous baptism". These are his words, expressed as if God the father had told them:

"I knew the weakness and frailty of man, which leads him to offend me. Not to be forced by it or anything else to commit guilt, if he does not want, but as fragile, falls into the guilt of mortal sin, for which loses the grace he received in the Holy Baptism by virtue of the blood of my son.

Therefore it was necessary that my divine charity Proveyese to leave them a continuous baptism, which is received with the contrition of the heart and with the Holy Confession, made at the feet of my ministers. The Blood of Jesus Christ is what makes the priest's absolution slip through the countenance of the soul.

If confession is impossible, the contrition of the heart suffices. Then it is my clemency that gives you the fruit of this precious blood. But, being able to confess, I want you to do it. Who can not be confessed, has been deprived of the price of the blood of the Lamb "(Saint Catherine of Siena," the dialogue ").

Also the Council of Trent presents the confession as a second opportunity, as a concrete sample of the faithful love of a God who comes to rescue us from our weaknesses. In the decree on Penance and rites (November 25, 1551) We read the following:

"If they had all the regenerated so much gratitude to God, that constantly preserve the holiness that for their benefit and grace received in baptism, it would not have been necessary to have instituted another sacrament other than this one, to achieve the Forgiveness of sins.

But as God, abundant in his mercy, knew our weakness, he also established a remedy for the lives of those who later villagers to the bondage of sin, and to the power or slavery of the demon; It is to be known, the Sacrament of penance, by whose means it applies to those who sin after baptism the benefit of the death of Christ.

It was indeed necessary penance at all times to obtain grace and justification for all men who had incurred in the stain of some mortal sin, and even those who pretended to purify themselves with the sacrament of baptism; In luck that abhorred his wickedness, and redeeming of it, detested so grave an offense of God, gathering the abhorrence of sin with the pious sorrow of his heart. "

Baptism and confession are, thus, two bonds of love (cf. Os 11.4) with which God draws us to himself through the Paschal sacrifice of his son. "For God so loved the world that he gave his only son, that all that believeth in him should not perish, but have eternal life" (Jn 3.16).

Before so much love, we only have to sing continually the mercy of the father, with the magnificent chorus of the redeemed, with the voice of so many forgiven sinners, with the words of his best friends. We make our words of Saint Catherine of Siena:

"O Mercy, born of your divinity, eternal Father, and who governs the whole world! In your mercy we were created; In your mercy we were created again in the blood of your son. Your mercy keeps us. Your mercy put your son in the arms of the cross, fighting death with life, and life with death. Life then defeated the death of our guilt and the death of guilt ripped bodily life to the immaculate Lamb. Who was defeated? Death. What was the cause of it? Your mercy.

Your mercy vivifies and enlighten. Through it we know your clemency for all, righteous and sinful. With your mercy you mitigate justice; By mercy you have washed us in the blood; By sheer mercy you wanted to live with your creatures.

O Crazy love! Wasn't it enough to embody you? You wanted to die! Your mercy pushes you to do for the man even more. You stay in food so that we, weak, have sustenance, and ignorant, forgetful, do not lose the memory of your benefits. That is why you give it to man every day, making you present in the sacrament of the altar within the mystical body of the Holy Church. And this, who did it? Your mercy. O Mercy! To any part that I return, I find but Mercy "(Saint Catherine of Siena," the dialogue ").