Featured
articles
It started with a video and today gets to pray 100,000 users
May feelings thrill and make you pray. 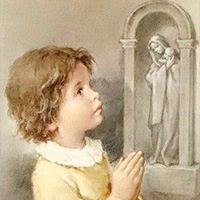 Created by three young people in 2012, May feelings has published more than 4.5 million sentences and has more than 100,000 users. Its pre-history was humble: On May 1, 2008 Bosco, Joaquín and Santiago uploaded to Youtube the video "May Feelings" which offered 50 reasons to pray the rosary. Astonished to discover that it was the most watched video in Spain in that month, with several thousands of visits and letters that came to them without stopping, so they decided to create the social network with the same name in which the people write the petitions, with possibility of doing it in several languages. Other users voluntarily assume to pray for them, even without knowing each other. It is the closest thing, in this technological epoch, they think, to what St. Paul testified about the constant interaction that occurs in the church.

-How did it happen to three young people to create the social network of sentences May feelings?
On May 1, 2008 we published on Youtube a video called "May Feelings", which gave 50 reasons to pray the Rosary. It managed to be the most watched of Youtube in Spain in that month and expanded in a media form around the world. From that moment, and each month of May, presented a new video to encourage prayer among young people getting hundreds of thousands of visits.

For four years we did not stop receiving hundreds and hundreds of "emails" from people who wrote to pray for them, and at the same time, hundreds of "emails" from people who wanted to help us continue the work. We started to connect via email to those people who needed prayers with those who wanted to help praying. This practice was becoming more and more common so there came a time when we decided to take a step back and stop being the intermediaries and create a place on the Internet for that meeting could happen without us. That was the origin of Mayfeelings.com, the social network that prays to change the world. Now there's even a documentary that tells that story.

-How does this network work?

May feelings is a service that connects people from all over the world through the exchange of requests, comments and messages. People expose their needs in short messages, called "Prays", of 259 characters at most. These "Prays" are shared in the profiles of the people, sent to the followers and can be searched in the search tool of "May feelings".

-How many entries do you have and what are the most common requests from your supporters?
May Feelings is the first spiritual social network in the world, designed exclusively to pray. It is to be a meeting point between people who need prayers and people willing to pray for others. Their mission is to bring all people to God through prayer for others, regardless of their creed or ideology. Created on May 1, 2012, "may feelings" has, since then, been built as an authentic prayer machine, achieving spectacular data. In just over a year, 700,000 petitions have been published that have provoked more than 4.5 million sentences. As in any social network, your asset resides precisely in the people who are part of it. Currently, it has more than 100,000 users from 120 countries. Each day are published between 1,500 and 2,000 requests.

-You have versions in different languages, in which countries is panicking mainly?
The most active are, in this order: Spain, Argentina, Mexico, Colombia, USA, and Uruguay

-Do you have testimonies of the efficacy of prayer among your followers?
Yes, we have just made some videos with this theme. This is a campaign called PRAYPOR. They can be seen in the following directions:
Prayforantonia
Prayforcristina
Prayformerche

-Why is prayer important?
Because it is the way we have to relate to God and intercede for many people.

-Sometimes we get angry with God when he doesn't grant us what we ask him to do. Is it a mercantilist way to ask?
No. The prayer of petition is a very good and necessary kind of prayer, and why not, one possible motor to approach God. Jesus himself invites us to it in the Gospel.

-What are your future projects for the Web or for other types of activities?
We have just taken out the application of "may feelings" for mobile devices. We called to pray. Right now we're working on its expansion.