Featured
articles
I fell, I sank, and I woke up to start again
We can be more and more who believe that true love does exist, and that the way to achieve it is chastity. 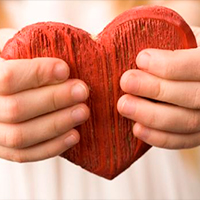 Hello! I am 22 years old, I am from Spain and I would like to share with you my testimony, because perhaps for many it helps and hope. I have always been Catholic, from a very young age, but I went through a time when, although at the bottom of my heart still believing and loving God, outside did everything I wanted. It all started about 18 years old. I started a serious relationship with a guy who at first, I thought he really loved me (typical), and it turned out it wasn't. After a few months I gave myself to him because for me it was another way to show how much I loved him, but within a few months all that love he thought existed vanished. It turned out that... I had only been with him to make another girl jealous!

Then I decided to do what many do, once they have come out wounded and disappointed with a love, they thought was true: "I will live life and enjoy it, but nothing serious". Some sure you know where I'm going... And so, I was there for a a while...

However, a year later, I met another boy I fell madly in love with. Everything was beautiful at first, he always called, wanted to make time for me, talked about his feelings towards me, everything was great. Although officially we were never a couple (we only dated), it was actually as if we were, because there was no one else, it was just the two of us. Four or five months later everything was ruined. He just preferred to spend more time with his friends, did not call me, was out partying a lot of and of course there was nothing left of those conversations in which he told me that I was "special" and "very important to him". When I  reunited courage and told him that I did not want to go on with that, he asked for forgiveness and I as a fool forgave him, and again and again, until another five months passed when I learned from a friend that he had messed with another girl. I felt myself dying, I felt stupid for not having noticed, for having forgiven him so many times in the hope that I would change... I broke up with him, I erased him from all my social media, but I sank. And instead of going out after a while, I devoted myself to party, to go out with boys... instead of focusing on me... Of course, at that time when I was partying or with a guy, I really felt something like happiness, but it was not happiness, it was something that only lasted while I was there. But then I came back to my room and I was alone, I cried.
I am a college student so I live in a residence. The peculiarity of this residence is that it is only of girls and is carried by nuns. I say this because the director of that residence was the one who helped me get out of it. She realized that something was wrong, went out too much at night until a thousand, just going to class, was always shopping... I walked away from everything believing that I was being happy. One afternoon she took me and took me to her office to talk. I do not know how, when I came to the subject that I thought I had forgotten, I began to cry, but mourn as I had never done before. I had no consolation. She held out my hand, she and my parents stood by my side and I came out of that dark well and saw a little light again. But I wasn't really cured at all and I wasn't happy at all. I didn't know why. It was like something was missing... One day I started reading the Gospel and I liked it. I also started going to the university pastoral meetings and I had a great fun. I felt the need to go to mass and little by little I was being really happy, but still I needed something... In the month where the sacrament of penance or reconciliation is made, I told my director and spiritual guide (the girls at the residence do pastoral meetings too) who wanted to confess me, that I needed it. I have to say that since I was 9 years without confession, and when I came to speak with the priest was very nervous, I thought "will judge me", "I will judge", but not... I told him everything and he said "God had found a way to get to me, I was doing a way myself to approach him, which of course I had to keep doing", and after giving me some advice and tell me beautiful words absolved me of all my sins. When I left the confessional really for the first time, I was happy, very but very happy! I felt like I was liberated. Today I keep advancing on that path and I notice that my life is much better and thank God I'm really happy now.