Featured
articles
Steve Jobs In Front Of The Mirror
Steve Jobs' death has touched us all, like so many other deaths, but media deaths end up shaking us socially, and this is always an opportunity for reflection. 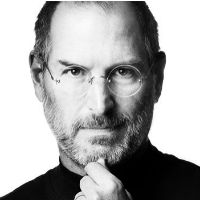 The death of Steve Jobs has been irradiated by the media at the speed of light, like a lightning bolt branches in less than a second in a sky illuminated by those electrical branches that end up resembling claws that trap you with their roar. It is the speed of the news, the speed of the network, the immeasurable echo of the most important on the planet. The death, after all, is the same, only that some die next to the fire of a candle and others as if they were under infinite halogen foci radiated from the sky. Then, the small finitude can resemble a spectacular soccer classic where the ball can roll and roll, and never reach the band.

Steve Jobs' death has touched us all, like so many other deaths, but media deaths end up shaking us socially, and this is always an opportunity for reflection.

We know little and much of the founder of the giant Apple. However, we know the important thing, that after all, is what starts my words today. We know he was a simple guy, an entrepreneur, a brilliant man. He created Apple with 20 years, founded the Pixar production company, the most important today, and managed to be at the forefront in everything related to communication and computing. A guru with a star, a genius, a discreet Julio Verne, little given to the excesses of success and much more friend of discretion and effort, that demonstrated by the Nobel Prizes, winners who sometimes seemed not to live up to any of the "idols" that Telecinco manufactures, well championed by the Belén Esteban paradigm.

However, this guy dazzled with his humility. Rich, powerful, with enough fame to eat the world he looked after his appearances meticulously and did so without spectacularism. Of all the public appearances that we remind you, there was one that will happen to that collective imaginary that ends up immortalizing those great speeches that make history, without the epic tone of that William Wallace of the cinema, the one who haunted his ragged Scottish army in the film of Braveheart, but with the same strength and depth. I mean the one he delivered during the graduation of the 2005 course at Stanford University, which you can find subtitled on YouTube. It's not to be missed, really.

Three things the Apple founder said I'd like to share with all of you, three things that keep moving me and that communicate with the way I am, or at least what I'm trying to be. Three things that are born from the heart of a man already sick, but full of life. Three very useful things, especially for the younger ones. And he knew it.

In that speech, Steve Jobs recalled that his life was not easy, not easy, but that he discovered that to overcome adversity he had to put love into what he did. Only if one does what one loves will be happy, only if we do something that gives true meaning to our lives, then if our life will make sense. And this, make no mistake, always has to do with our impact on others.

And what to say about those misfortunes in which we sometimes stand to mourn our bad luck! What to say about all those things that come to us crooked in life! Well, Jobs seemed to be clear. Nothing happens by chance, there is something that transcends us all, something that organizes things in a way that we do not understand when we look to the future, but when we start the memory. So yes, says the apple founder, so we can discover "that the dots end up connecting," as if "someone" had done it for you.

However, while these two reflections are important, I think the third is fundamental, so much so that it can even change our lives. Steve Jobs recalled that there was something that helped him succeed, something that helped him bring out the best in him, something that placed him before the truth, in the silence of a life that sometimes ends up being all noise. It was a dynamic, a simple dynamic that I propose to myself and you today. Are you ready? Because if they're not, because if one really isn't, vertigo can hurt us. However, if you are or at least want to try, stand in front of the mirror, take your time to look at yourself and ask yourself: if today was the last day of my life, would I want to do what I'm doing?

And it is that death not only causes pain, it can also sometimes illuminate the meaning of our life