Excerpt from the Catechism of the Catholic Church in its third part (Life in Christ), first section (Man's overturn: life in the spirit); Chapter Two (The human community); Article 3 (Social justice). 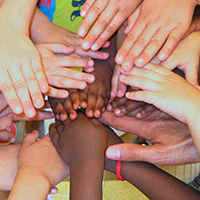 III. Human solidarity
Excerpt from the Catechism of the Catholic Church in its third part (Life in Christ), the first section (Man's overturn: life in the spirit); Chapter Two (The human community); Article 3 (Social justice).

1939 The principle of solidarity, expressed also with the name of “friendship” or “social charity”, is a direct demand of the human and Christian fraternity (cf SRS 38-40; AC 10):

A mistake, “now widely extended, is the oblivion of this law of human solidarity and of charity, dictated and imposed by both the community of origin and the equality of rational nature in all men, whatever the people they belong to, as by the sacrifice of redemption offered by Jesus Christ on the altar of the cross to his Father of heaven, in favor of sinful humanity” (Pius XII, Enc. "Summi pontificatus").

1940 Solidarity is manifested in the first place in the distribution of goods and the remuneration of work. It is also the effort in favor of a more just social order in which tensions can be better resolved, and where conflicts find their negotiated solution more easily.

1942 The virtue of solidarity goes beyond material goods. By disseminating the spiritual goods of faith, the Church has at the same time favored the development of temporary goods, which has often opened up new ways. Thus have the words of the Lord been verified over the centuries: “Seek first his kingdom and his righteousness, and all those things shall be given unto you in addition” (Mt 6, 33):

For two thousand years lives and perseveres in the soul of the Church that feeling that has propelled and still drives souls to the charitable heroism of the farmer monks, the liberators of slaves, those who serve sick, the messengers of faith, of civilization, of science, to all the generations and to all the peoples in order to create social conditions able to make possible to all a life worthy of the man and the Christian (Pius XII, speech of 1 June 1941).