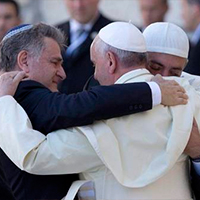 Spiritual attention is a right of all citizens

Madrid, Wednesday, October 6, 2010 (ZENIT.org).-Leaders of three religions (Muslim, Jewish, and Christian) agreed to affirm in Madrid, Spain, that spiritual attention is a right of all citizens, regardless of their beliefs.

The religious leaders took part in a roundtable, at the close of the XV National Conference on Human Health, organized by the Religious Camilos, held on 5 and 6 October, attended by some two hundred people.

The table was attended by Riay Tatari, imam president of the Islamic communities of Spain, Moisés Bendaham, Rabbi Mayor of Madrid, and Francisco Álvarez, provincial Superior of the religious Camilo in Spain.

At the roundtable, which was titled “Spiritual attention and religious pluralism”, the interveners confounded that “the spiritual attention is not only a fact but a right of all citizens independent of their beliefs”.

“Spiritual attention at the end of life” is the central theme of these days attended by professionals and pastoral agents from all over the country.

In addressing this argument, the organizers claim that it is an “essential dimension to give an integral response to the terminally ill and their families”.

The opening ceremony of the Conference was attended by Marc Simon, director of the integration area of the Obra Social Fundación la Caixa, Javier Rocafort, president of the Spanish Society of Palliative Care (SECPAL) and José Carlos Bermejo, director of the Center of Humanization of the Health, of the Religious Camilo's.

The three agreed that spirituality is a central axis in the care of the sick at the end of life. The three institutions are involved in an innovative project that seeks to improve this attention in different hospitals and palliative care units throughout Spain, and in which more than 30 psychosocial care teams (EAPS) are participating.

At the inaugural conference, Enric Benito, specialist Doctor of Oncology and Palliative Care, underlined the importance of also attending in the scientific field the realities of meaning that cannot be “weighed” or “measured”.

Similarly, he noted hospitality, presence, and compassion as essential dimensions to be taken into account by professionals who are going to care for people at the final moments of their lives.