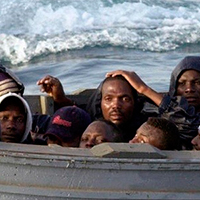 By: Pontifical Council for Migration and CELAM | Source: Zenit.org

The analyzes and discussions have been carried out in the light of the Magisterium of the Church, especially the Instruction Erga migrantes caritas Christi and other important instruments that the Church offers to serve as a guide to this specific pastoral.

- Besides, we have noted the grave danger in which they sometimes live and the threats to which both pastoral workers and all those who defend the person, dignity, and rights of the people affected are exposed both by economic migration and by the forces.