Message from the Latin American Episcopal Council, Department of Justice and Solidarity 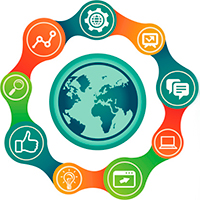 To Promote a Human Development, Integral, Solidary and Inclusive
Message from the Latin American Episcopal Council, Department of Justice and Solidarity

From 11 to 14 February 2011 we have met in Bogotá Bishops, support and reflection teams of the Justice and Solidarity Department of the Latin American Episcopal Council, to evaluate the management 2007-2011 and make proposals for the upcoming planning of the Department in the context of the Continental Mission that we assume from the fifth Conference of the Latin American and Caribbean Episcopate in Appeared.
In the spirit of service and communion that characterizes the CELAM, we share with the committees of Pastoral Social Caritas, organizations related to justice and solidarity, with entities that work with migrants and in the pastoral of tourism of the episcopal conferences of Latin America and the Caribbean, with pastoral agents and social leaders, to express our concerns, hopes and proposals in the perspective of the promotion of an Integral, solidarity and inclusive human development in our peoples. As proposed by the Appeared Document (cf. DA 474), in fidelity to the Second Vatican Council that shows us that the joys and hopes, the sorrows and anxieties of the people, especially the poorest and most excluded, are joys and hopes, sadness and anxieties of the disciples of Christ (cf. GS 1).

The reality of our region and the development processes
1. Pope Paul VI already posed in the Encyclical Populorum Progressio that development is "the step for the whole person and all people of less human living conditions to more human living conditions" (PP 20). However, the reality of the processes and styles called development in our continent are far from being, despite the notable efforts that have been given.
2. The economic growth of the Latin American and Caribbean region has been notable, especially in the year 2010. However, generic poverty continues to affect more than a third of the population, and the average inequality index is the highest in comparison with those of other continents in the world, reinforcing persistent situations of dehumanizing misery. (cf. Caritas in Veritate 22). This situation moves us to renew strongly our preferential option for the poor.
3. The unemployment rate in the region remains close to 8 percent of the Economically Active Population, which is accompanied by precarious or underemployment, which affects more than one-third of the population. Policies of deregulation of labor relations applied in the last decades, which prevents decent and dignified work, with fair wages, social security and the right to unionization, prevail.
4. Among the main causes of the aforementioned situations, we find a process of concentration of wealth in few hands, an important expatriation of the profits of transnational corporations, an unfair distribution of wealth in the interior of our own countries, as well as regressive fiscal policies that tax the poor.
5. It is necessary to point out the strong degradation of soils and water, the loss of biodiversity, the climatic disasters, the progress of desertification, among others, are a constant in the region that put all populations at risk. The prevailing economic approach does not account for the physical limitations of renewable and non-renewable resources. On the contrary, development, understood as economic growth, is reduced to the free market, which only seeks to maximize profit, thus leaving the human person relegated. All this makes us see the unsustainability of these processes. As a Church we must make our voice heard, preventing the destruction of humanity (cf. CIV 51-B).
6. In this context, we are concerned about the privilege of the free movement of capital and goods, but not of people. Awareness of civil and political human rights has been entrenched, but the same progress in economic, social, cultural and environmental rights is not perceived.
7. It is so that there is no real human development approach and we continue to perceive the suffering faces of those who are excluded from health systems, privileging compensatory and non-universal political programs as rights of people. Also, prisons continue to be spaces of punishment and dehumanization, where it is naively intended to "enclose evil".


8. In the political sphere, while there are important advances in participatory democracy in local spaces, the concentration of power prevails in certain elite groups and clamorous situations of corruption continue to be shown, the increase of drug trafficking and other organized crime groups dedicated to trafficking in migrants and trafficking in persons (especially children and adolescents) for the purpose of supply to all forms of slavery.
There are reasons for hope
9. However, the efforts of our peoples in solidarity economy and fair trade experiences that are achieving a more effective economic dynamism in the region, as well as the important network of community health workers, are hopeful, the existence of social, indigenous and urban organizations for the ecological preservation of the environment, especially in the Amazon and the biodiversities in the region. It is noticed the impact of policies and laws and the existence of groups and networks working to defend the human rights of migrants and refugees, children and adolescents, and the transformation of the lives of imprisoned persons and their reintegration into society.

10. We also see the emergence of civil society as distinct from the market and the State. It is expressed through movements and grassroots organizations that group different sectors of society. They are new agents in the public space in the struggle for universalizable interests seeking the common good.

The road that we are traveling
11. Faced with this reality that moves and interpellates us, we want to share the answers that we have been giving from the various areas of social pastoral, answers that usually in solidarity alliance with important collectives and networks of civil society and social movements, they are directed towards the change of the unjust structures of the society (cf. DA 383).

12. We have encouraged collectives of solidarity economy and fair trade, driven reflections and proposals for a genuine corporate social responsibility because, as John Paul II said, the company is primarily a community of people (cf. CA 43). Strenuous efforts have been made before governments to review and update migration laws in different countries, giving them a human rights approach to migrants and refugees and to implement international instruments such as convention for the protection of the rights of migrant workers and their families. Likewise, it has advanced in the defense of the rights of the gypsies, in the attention to people in street situations and other itinerant groups.

13. We consider it important to promote the Pastoral of Tourism to evangelize this reality in continuous growth, which requires a particular dynamism to respond to challenges and challenges that are presented continuously.

14. It has been working on building on the construction of a common awareness of environmental and ecological challenges. Today, a Latin American platform is known to be able to develop common pastoral strategies that contribute to the urgent sanitation of creation (cf. Caritas in Veritate 50).

15. Efforts have been made for the right to health, its promotion, and the prevention of diseases of higher prevalence. In this social action, ecumenical, Interfaith dialogue and civil authorities have been promoted.

16. It has been working on the defense of the rights of children and adolescents by influencing public policies that recognize their rights.

17. Steps are being given in the formation of laymen and laity to encourage their commitment to the transformation of reality into the social, political, economic, cultural and ecological fields. As Christians, we have sought to intensify our presence among workers and their organizations and to encourage our Church in its commitment to the cause of justice, peace, solidarity, and participation for the common good.

18. We have also been contributing our presence in prisons and denouncing the prison model and the approach proposed by more prisons as a solution.

Cooperation between civil society and the Church
19. We emphasize a new role of civil society in the rescue of fraternity, freedom, equality, taking into account that an intercultural process is given in the communities. The Church is called upon to help mediate between globalized culture and cultural expressions in the region.

20. As Christians we are challenged to do everything possible to change the course of the world for the full respect of human dignity, to accompany those who propose new models of development and coexistence that favor the integrity of the person. We need to return to the salt of the earth and the light of the world (Mt 5, 13-16), to help transform from within the cultures and especially the predominant consumerist lifestyles. It is up to us to work together in the formation of consciences and to make the earthly life more worthy of the human being so that all of us in Christ have life and life in fullness (Jn 10.10).

21. From our commitment to the building of the Kingdom of God in the world, we offer the service of formation in the Social Doctrine of the Church as invaluable richness, which has encouraged the testimony and the solidarity action of the laity and laypeople, who are interested increasingly for their theological formation, as true missionaries of charity, and strive to effectively transform the world according to Christ (DA 99g)
Challenges of our reality in the face of integral human development in solidarity as a horizon for the Region.

22. To deepen the orientation of the Region towards a process of integral and solidarity human development, based on the care of creation and as a starting point the efforts of impoverished and excluded populations to emerge from these situations of poverty and exclusion through multiple forms of economic solidarity and in other areas mentioned. It is necessary to articulate with efforts of corporate social responsibility, inclusive public policies, international processes of globalization of solidarity.

23. Develop pastoral strategies to recover the believing gaze on the creation and growth of a consciousness of change in the patterns of economic development and consumption towards sustainable modes that preserve the quality of our ecosystems, Through the incidence in national and international politics starting from our local communities. It is necessary to promote sober and simple lifestyles, with healthy habits.

24. Concerning migration policies, we must open the borders of our countries, that all of us are recognized as citizens of Latin America and the Caribbean as a common homeland. Continue with efforts to ensure universal access to health and lifelong learning and education.

25.Is urgently rethinking the right to work, considering it not as a market problem, but of the State and society, as a problem of citizenship, the exercise of their rights and capacities. Decent, dignified work is one of the best tools to liberate citizens from fear, poverty, all kinds of dependencies. The valuation of the work is the central element of solidarity development.

26. Reorganizing social action and penitentiary pastoral at the regional and continental level to contribute more effectively to the model of integral human development, questioning more strongly the current model of prison dehumanization from the approach of the dignity of people.

As missionary disciples of Jesus Christ, we pledge to contribute to the construction of projects of just nations, solidarity, and in peace towards Human Development, Integral, Solidary and inclusive.

We thank God for the way we have done and ask forgiveness for what prevents us from living as Missionary Disciples in the world. We implore wisdom and strength to promote the Continental Mission of the Church in Latin America and the Caribbean in the different areas of society.

We renew our trust in the great affection of the Virgin Mary of Guadalupe for all her sons and daughters of this continent and we welcome her maternal protection.