Featured
articles
Conceptual key: Works
Fragments of documents of the Social Doctrine of the Church that refer to doing works that derive in the common good 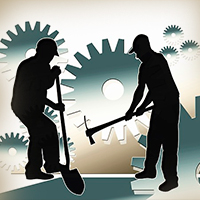 Conceptual key: Works
Fragments of documents of the Social Doctrine of the Church that refer to doing works that derive in the common good

The OT (Old Testament) proposes many texts that list the good works that God asks of men. Many of the works of righteousness are contained in the codes of the holiness of the Torah (cf. Ex 19-23; Lv 17ss e Dt 12ss).

A good summary is found in the splendid "Testament of Tobit" (cf. Tb 4, 5-19): it is exhorted to remember the Lord, to practice alms, to guard chastity, to love the brothers in humility, to give just and timely retribution, to live in sobriety and in generosity towards the hungry and the naked, in the piety towards the deceased, in the constant search of the growth in the wisdom, in the continuous blessing and invocation of the Lord. It is at the heart of this admirable text where the golden rule appears: "Do not do to anyone what you do not want to be done to you" (Tb 4.15).

The ecclesial Doctrine inspired almost to the letter in this teaching, will elaborate the doctrine of the seven works of mercy, spiritual and physical. They are works of spiritual mercy: to instruct the ignorant, to advise the doubtful, to console the afflicted, to comfort the desolate, to forgive the enemies, to suffer with patience the annoying. They are works of physical mercy: to feed the hungry, to give shelter to those who do not have, to dress the naked, to visit the sick and the prisoners, to bury the dead, to give alms to the poor (cf. CIC 2447).

The NT (New Testament) offers double teaching on "works". On the one hand, these are desired by God and from Him, they will receive the reward as deserving; on the other, the works of the law are not a guarantee of salvation, which depends solely on the divine grace revealed in Jesus Christ and embraced by → faith. We will expose these two doctrinal bastions by attempting a synthesis to seek their unity.

1. The good works (kala erga) are worthy and desired by God.

Jesus teaches his disciples to perform good deeds so that men can recognize in them the glory of God the Father (cf. Mt 5.16). Therefore, they must be carried out in the purest → gratuitousness, without seeking the glory of men (Mt 6.1), but only to please the Father who sees in the secret and will reward in the beyond. With regard to this, the perspective of the "reward" (misthós) is not excluded from Jesus. Thus the tradition will interpret the evangelical invitation to hoard treasures in the sky with the alms (cf. Mt 6,19-20) and to "enrich themselves in order to God" (Lk 12.21), as an exhortation to practice good works of generosity in view of the celestial prize (1Tm 6.18). Jesus himself with his life has fulfilled a series of good works (Jn 10.32). He praises as "good work" the anointing received in the house of Bethany (Mc 14.6) and warns that the judgment will consider the works of mercy (cf. Mt 25, 32SS). The primitive community considers the good works-almost identified with the alms-as a sign of righteous conscience and orientation to the salvation (cf. the disciple Tabita, Acts 9.36; and the centurion Cornelius, Acts 10, 1.4). The same epistolary Paulino recommends pursuing "peace and mutual edification" (Rm 14.19). "Consider one another for the stimulation of charity and good works" (Hb 10.24). Remember also that "faith acts for charity" (Ga 5.6). The practice of good works attests to the reliability of a person (1Tm 5.10) and is stimulated by the teaching of Sacred Scripture (2 Tm 3.16). The NT teaches that the Lord will judge each one according to his works (cf. P.E. Rm 2.6; 1 Co 3.13; AP 2, 2.19) and prospects the eternal reward as a "break" for fulfilled works (cf. AP 14.3; Hb 4.10).

2. The works are incapable of giving salvation.

It is known the contrast placed by Saint Paul between Faith and Works. Innumerable texts strongly articulate the disproportion between the → Gratuitousness of the gift of God in Jesus Christ and the capacity of human works, understood as an effort to fulfill the justice of the law. Rm and Ga possess this leitmotiv: "Because we believe that man is justified by faith, without the works of the Law" (Rm 3.28). "I want to hear from you a single thing: do you receive the Spirit by the works of the law or by faith in preaching?" (Ga 3.2). "He saved us, not by the works of righteousness we would have done, but according to his mercy, through the bath of regeneration and the renewal of the Holy Spirit" (Tt 3.5). For Paul, the law teaches and prescribes the good works dear to God, but without giving the capacity to the human heart, wounded by sin, to fulfill them. Therefore it "condemns" man to the consciousness of selfishness and thus fulfills pedagogue: it reveals the truth of the objective moral good and the subjective evil intrinsic to the human heart (cf. Rm 7; Ga 3, 19SS). Only the grace of the Spirit bestowed by faith in the dead and resurrected Christ will enable the works of faith to be fulfilled.

3. The works are the fruit and the sign of grace.

Once accepted the Pauline doctrine of the priority of the grace for the → justification, it is necessary to maintain the faith and the grace, give fulfillment to the works and the law, without abolishing them and without opposing them (DS 1559). So good works are like the fruit of a heart renewed and uninhabited by the filial grace of the Spirit of Christ. Conversion transforms the human heart and makes it capable of giving those fruits of goodness that God expects (cf. Lc 6,44-45) and that spring from the spirit (cf. Ga 5.22).

Probably the fullest compendium of "synergy" between grace and works is found in these verses: "For you have been saved by grace through faith; and this does not come from you, but it is a gift from God; nor does it come from the works (ouk ex ergôn), so that no one boast. In fact, work (Poiêma) of Him we are: Created in Jesus Christ in order to the good works (epi ergois agathois) which predisposed God to practice" (Ef 2.8-10).

Here it shines at the same time the total gratuitousness of → salvation as a gift of grace and the essential fidelity due to this grace through a fruitful life in good works. In this perspective, Paul and James can be reconciled. St exhorted: "What good, my brethren, may someone say, "I have faith” if you have no works? ... Thus also the faith, if it does not have works, is really dead" (St 2, 14.17). Examples of Abraham and Raab show that already in the OT the faith in the Lord implied in intrinsic mode the practical obedience of the works: "the faith cooperated (synergei) with the works" (St 2.22). The works externally demonstrate the inner truth of the faith: "I will prove to you by the works my faith" (St 2.18). So "man is justified by works and not only by faith" (St 2.24). With the Augustinian terminology we can say that the "first justification/first resurrection" (quoted in Rm 3.28: the passage from the death of sin to filial life) depends exclusively on the confident faith in the divine initiative (gratia praeveniens), while the "second justification/resurrection "(quoted in St 2.18: concerning salvation and eschatological retribution) is attributed to the faith that acts through charity (gratia cooperans).