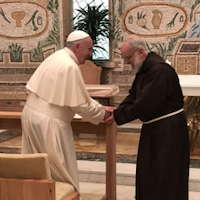 In his second Sermon for Advent 2018, the Preacher to the Pontifical Household continued his reflection on the Holy Trinity. The Sermon was delivered in the “Redemptoris Mater” Chapel in the Apostolic Palace, in the presence of Pope Francis.

“The Trinity is like one of those musical triangles that vibrates and gives forth the same sound from whatever side it is struck.” This was one of the key notes of the Second Advent Sermon given by Fr Raniero Cantalamessa, OFM Cap., the Preacher of the Pontifical Household. In this “triumvirate,” he said, the Father, the Son, and the Holy Spirit, are always “engaged in glorifying each other.” Fr Cantalamessa’s sermon revolved around the idea of this Trinitarian symphony. “There is only one ‘place’ in the world where the rule of ‘love your neighbour as yourself’ is perfectly put into practice, and it is in the Trinity!”

Rublev’s Icon of the Trinity

Father Cantalamessa recalled that “the model for all representations of the Trinity” is the icon of Andrei Rublev, written in 1425, and reproduced in mosaic in the Redemptoris Mater Chapel. The dogma of the Trinity, he observed, is expressed by the fact “that the three Persons represented are distinct but closely resemble each other.” And they “are ideally positioned within a circle that highlights their unity.” From the icon, he said, comes forth “a silent cry”: “Be one as we are one.”

The Trinity, Fr Cantalamessa said, shows us “the true path to unity”: “the three Persons are united but without being confused; each Person ‘identifies’ with the other, gives Himself to the other, and sustains the existence of the other.” All people want unity, he said, and “desire it from the bottom of their hearts.” So why is it so difficult to achieve unity? Fr Cantalamessa asked. “It is because we want unity of course, but . . . unity around our point of view.” The problem, he explained, “is that the person before me is doing exactly the same thing with me. No unity will ever be achieved if we go about it this way; unity requires the opposite path.”

The Trinity is “a living and vibrant reality,” the papal preacher continued. It is the absolute manifestation of love: “Every divine Person loves the others exactly as himself.” Fr Cantalamessa said that “contemplating the Trinity truly helps us to overcome ‘the hateful divisions of the world.’” He explained, “We can be divided on our thinking—on doctrinal or pastoral questions that are still legitimately debated in the Church—but we should never be divided in heart: In dubiis libertas, in omnibus vero caritas (‘liberty in doubtful things, charity in all things’).” This, he said, “specifically means imitating the unity in the Trinity, which is, in fact, ‘unity in diversity.’”

Entering into the Trinity

Finally, Fr Cantalamessa said, “There is something that is more blessed that we can do with regard to the Trinity than contemplate and imitate it. And that is to enter into it!” Christ, he explained, “has left us a concrete way to do that: the Eucharist.” Father Cantalamessa said that at “the moment of Communion” the words of Christ, “I in them and you in me” (Jn 17:23) are “actualized… in a strict sense.” In the Eucharist, he concluded, we are offered the grace to be “table guests of the Trinity.”