Vatican
News
Prepare for Christmas with the courage of faith
The Pope said “it’s not easy to keep the faith, to defend the faith”. 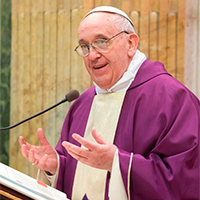 Pope Francis invited Christians to live the Advent season preparing for Christmas by asking for the grace of keeping the faith.

Pope Francis on Monday shone the spotlight on the second week of Advent urging believers to ask for the grace to prepare themselves with faith to celebrate Christmas.

Speaking during the homily at Mass at the Casa Santa Marta, the Pope said “it’s not easy to keep the faith, to defend the faith”.

Reflecting on the Gospel reading of the day that tells the story of a paralysed man healed by Jesus, the Pope said faith gives us courage and shows us the way to touch the heart of the Lord.

He noted how, in the parable, the Lord “saw the faith” of those who brought the man and set him in His presence. “It took courage,“ he said, to go up on the roof and lower him on the stretcher through the tiles…. “Those people had faith: “They knew that if the sick man was put in front of Jesus, he would be healed”.

The Pope also recalled other episodes in which Jesus expressed admiration for people’s faith. Like in the case of the centurion who asked  for the healing of his servant,  of the Syrophoenician woman who interceded for her daughter who was possessed by the devil, and of the woman afflicted with hemorrhages  who was healed after having touched the hem of Jesus’  cloak. “Jesus, the Pope said, reproaches people of little faith”, like Peter who doubts, but he said; “with faith everything is possible”.

In this second week of Advent, Pope Francis continued, “we ask for the grace to prepare ourselves with faith to celebrate Christmas”.

“From the bottom of our hearts” he concluded “utter an act of faith and say: I believe Lord. Help me in my faith. Defend my faith from worldliness, from superstitions, from all that is not faith. Keep it from being reduced to theory, be it theological or moral…  Faith in You, Lord”.