Vatican
News
God is in our midst
All the promises made by the Son of God are infallibly kept. 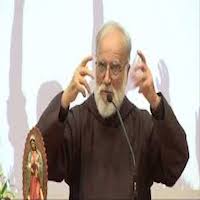 Father Raniero Cantalamessa, the preacher to the pontifical household, delivered the first in a series of Advent meditations on December 7, with Pope Francis among the members of the congregation.

Each year the Vatican schedules a series of Advent reflections, offered each Friday morning by the papal preacher, Capuchin Father Raniero Cantalamessa. Delivered in the Redemptoris Mater chapel of the Apostolic Palace, the meditations are attended by the Pope, the Roman Curia, and vicar and auxiliary bishops of Rome.

Reflecting on the second verse of Psalm 42: “My soul thirsts for God, the living God”, Father Cantalamessa said that caught up by daily tasks and problems to be faced, “we risk losing sight of”, or putting to the side our personal relationship with God.

This relationship, he explained, is what allows us to face situations and problems “without losing peace and patience”.

Let us seek God, not aliens from outer space

Describing the living God as “a constant and reassuring presence”, Cantalamessa pointed out that men and women of our time are passionate in their search for the existence of aliens and signs of life on other planets. He said it is a legitimate interest but lamented the fact that very few “seek and study signs of the living God who created the universe, entered into its history and lives in it”.

He is in our midst, he continued, and we neglect Him in order to dedicate ourselves to the search for “hypothetical beings who, in the best of cases, could do very little for us, certainly not save us from death”.

Cantalamessa explained that all the promises made by the Son of God are “infallibly kept,” that and he invited believers never to forget that God is not an abstraction, but a reality.

The search for the face of the living God

Studding his reflection with examples and quotations, Cantalamessa focused on the stories of converts: men and women, he said, in whom the “spark” of the intellect has led to “enlightenment”. They are those, he continued, “to whom the existence of God has suddenly revealed itself, at a certain point in their lives, “after having tenaciously ignored or denied it”.

Cantalamessa warned however against the temptation to bridle and constrain the divine in a definition, even though it may be based on the Bible.

What we can do, he said, is to go beyond the “faint signs of recognition that men have traced on the surface” and shatter the limitations posed by “our ideas of God” allowing His perfume to emanate and spread “filling the house”.

“The divine is an absolutely different category from any other, which cannot be defined, but only hinted at; it can only be spoken of through analogies and contrasts. An image that the Bible uses to speak to us of God is that of a rock” he said.

God is here and that's enough!

Fr Cantalamessa concluded his sermon recalling one of the moments of darkness and discouragement in the life of Saint Francis of Assisi following “some of the deviations he saw around him stemming from the primitive lifestyle of his friars” and said he was reanimated by the certainty that “God is here, and that is enough”.

“Let us learn, he urged,  to repeat these simple words also when, in the Church or in our lives, we find ourselves in situations that are similar to those of Francis: God is here and that’s  enough”.