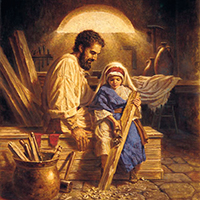 This is how theµ birth of Jesus Christ came about. When his mother Mary was betrothed to Joseph, but before they lived together, she was found with child through the holy Spirit. Joseph her husband, since he was a righteous man, yet unwilling to expose her to shame, decided to divorce her quietly. Such was his intention when, behold, the angel of the Lord appeared to him in a dream and said, "Joseph, son of David, do not be afraid to take Mary your wife into your home. For it is through the holy Spirit that this child has been conceived in her. She will bear a son and you are to name him Jesus, because he will save his people from their sins." All this took place to fulfill what the Lord had said through the prophet: "Behold, the virgin shall be with child and bear a son, and they shall name him Emmanuel," which means "God is with us." When Joseph awoke, he did as the angel of the Lord had commanded him and took his wife into his home. He had no relations with her until she bore a son, and he named him Jesus.

Petition: Lord, let me better imitate St. Joseph in the way I deal with the people around me.

1. No Gloating: Joseph was taken aback to learn that Mary was expecting a baby. Here was a woman he always knew to be beyond reproach. Legally he could have denounced her publicly. Yet he didn’t. He was ready to let the whole matter drop quietly, as if to give Mary the benefit of the doubt. What a great virtue this is: to think the best of others! It reflects a heart of peace and calm. How many friendships have ended ― indeed, how many wars have started ― because people assumed the worst of someone else. Have I ever judged the motives of someone else, only to learn later that things were not as they first appeared? To whom should I be giving the benefit of the doubt?

2. Angelic Explanation: Notice that the angel appears to Joseph only after he decides to do the charitable thing and send Mary away quietly. So it often goes in the spiritual life: God reveals more of his plan to us only if we respond to a crisis with charity. It is as if Jesus says, “Treat others well and you will begin to understand me better.” In a crisis, is charity my first response?

3. Jesus’ Portal: This Gospel passage could be called a second Annunciation. At the first Annunciation, Mary said "yes" to the angel. Now, Joseph’s "yes" was needed in order to ensure that Jesus would have the appearance of an earthly father (and a reputable lineage). Jesus often wants to come back into the world, so to speak, to touch lives: through a work of charity, a word of kindness ― or even a new baby. He counts on our help though. What help could Jesus be asking of me so as to carry out his plans? Could I be thwarting his plans because of laziness, stubbornness, or selfishness? Is he asking me to cooperate with someone? With a loved one? A classmate? A co-worker?

Conversation with Christ: You wonderfully invite me to help you in your mission to save souls, Lord. You respect my freedom, and you want me to respond out of love. Let me appreciate that truth fully and let me be generous with you.

Resolution: I will agree to one request (big or small) today to help someone.