Vatican
News
Pope: ‘politics is a commitment to humanity and holiness’
Prophets of peace and workers for the common good 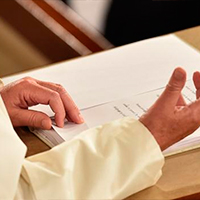 Pope Francis on Friday pointed to the figure of the Venerable Giorgio La Pira as a model for Italian and international statesmen in their duty to work for the common good.

“At a time when the complexity of Italian and international political life requires statesmen of substantial human and Christian” value in the service of common good, Pope Francis held up the figure of the Venerable Giorgio La Pira saying he is an exemplary model for the Church and for the contemporary world.

The Pope was addressing some 200 members of the “Giorgio La Pira Foundation” whom he received in the Vatican.

Giorgio La Pira, whose cause for beatification was approved by Pope Francis this year, was a committed Catholic MP in the years after World War II and then mayor of Florence until 1966. He was known well beyond the Florentine borders for his evangelical inspired social battles and for promoting peace events.

St. Pope John Paul II recalled La Pira several times pointing out his “extraordinary experience as a politician and a believer, capable of uniting contemplation and prayer to social and administrative activity, with a preference for the poor and the suffering”.

In his speech, Pope Francis described La Pira as “an enthusiastic witness to the Gospel and a prophet of modern times” saying that his attitudes were always inspired by a Christian perspective, while his action was often ahead of his time.

He mentioned his long career in the public space, of how he gave life to charitable works, and of how, when persecuted by the fascist regime he took refuge in the Vatican before being able to join the Constituent Assembly and to contribute to the drafting of the Italian Constitution.

“But his mission in the service of the common good found its summit in the period when he was mayor of Florence, in the fifties” the Pope said, when “La Pira took a political line open to the needs of social Catholicism and always on the side of the last and most fragile sections of the population.”

He also upheld La Pira’s work to promote social and international peace, with diplomatic activity, international conferences, a strong stance against nuclear war and the war in Vietnam.

Prophets of peace and workers for the common good

He encouraged those present to “keep alive and to spread the patrimony of ecclesial and social action of Venerable Giorgio La Pira; in particular his integral witness of faith, his love for the poor and marginalized, his work for peace, the implementation of the social message of the Church and his great fidelity to Catholic guidelines”.

“These are all elements which constitute a valid message for the Church and society today” he said.

Example for those who work in public sector

Pope Francis noted that La Pira’s example “is especially valuable for those who work in the public sector” and are called to be vigilant towards those negative situations that undermine the common good and the dignity of the person.

Quoting Giorgio La Pira who said ‘Politics is a commitment to humanity and holiness’, the Pope underscored this concept saying politics is “therefore a demanding way of service and responsibility for the lay faithful, called to animate temporal realities in a Christian way, as the Second Vatican Council teaches”.

He urged those present to treasure the legacy of La Pira and to “be peacemakers, architects of justice, witnesses of solidarity and charity”.

Speaking off-the-cuff the Pope concluded his discourse with an encouragement to be bringers of a “new spring” by being prophets of hope and of holiness, and by never being afraid to soil one’s hands to work and go forward.

“Swallows, he said, are needed today: you are swallows!”