Vatican
News
Pope at Mass warns against idolatry of money in the Church
Pope Francis invited Christians to respect churches as the house of God. 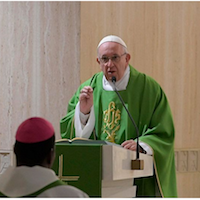 At Mass, Friday morning, Pope Francis invited Christians to respect churches as the house of God and not turn them into marketplaces of money and worldliness.

Pope Francis on Friday urged that churches be given due respect as the “house of God” and not be transformed into markets or social lounges dominated by “worldliness”.   Celebrating his morning Mass at the Casa Santa Marta in the Vatican, he warned that churches risked transforming themselves into marketplaces with sacraments on sale, which are free.

He was reflecting the Gospel reading on the feast of the Dedication of Rome’s St. John Lateran Basilica, where Jesus cleanses the temple of Jerusalem of all buyers and sellers, warning them against turning his Father’s house into a marketplace.

Jesus noted that the temple was populated by idolaters - men ready to serve "money" instead of "God". "Behind money there is an idol,” the Pope said, adding idols are always of gold that enslaves.

Pope Francis wondered if we treat our  “temples, our churches” as the house of God, the house of prayer, a place of meeting the Lord, and whether the priests treat it like that.

The Pope recalled instances of a price list for the sacraments that are free of cost. To those who argue that it is an offering, the Pope said, offerings are to be put secretly into the box without anyone noticing it.  He warned that there is this danger even today.

Pope Francis admitted the Church needs to be maintained by the faithful but this is done in the offering box, not with a price list.

Another danger that the Pope warned against was the temptation of worldliness.  He noted that in some celebrations or commemorations in the Church one cannot make out if the house of God is a place of worship or a social parlour.

The Pope said that some church celebrations slip into worldliness.  Celebrations must be beautiful but not worldly, because, he said, worldliness depends on the god of money.  He called this idolatry and said it should make us think about our zeal for our churches and the respect that we give when we enter them.

Heart – the temple of God

Pope Francis then drew attention to the First Letter of Saint Paul to the Corinthians which speaks about our hearts as the temple of God.  Despite our sinfulness, the Pope said, each one of us should ask ourselves whether our hearts are "worldly and idolatrous".

The Holy Father said it is not the question of what our sins are, but of finding out if there is the lord of money within us.   If there is a sin, he said, we have the Lord, the merciful God, who forgives if we go to Him.  But if there is other lord, the god money, we are an idol worshipper, a corrupt person, and not a former sinner.

The Pope concluded saying the core of corruption is precisely an idolatry, of having sold one’s soul to the god of money, to the god of power.