Vatican
News
Synod on Young People: Moment of Grace
The Synod’s theme is Young People, the Faith and Vocational Discernment. 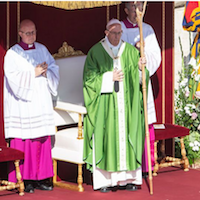