Family
Testimonials
It’s More Enriching to Read with Mom than to Watch TV or Play with Her
Sharing time, reading together an excellent way of communication 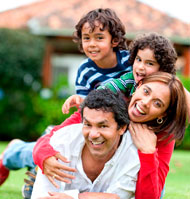