Youth
Virtues
They’ve Seen me Cross
I would like to tell you a story, I know that I am living the process, but that is just why I’m telling it. 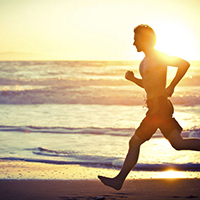 After a lot of though, on April 16th to be exact, I got up my courage (and I say it like that, convinced that I got up my courage because when we face ourselves is when we need the most strength) and I wrote my nutritionist saying I needed a change.

When I began the process with Fabi I had 31.6 % of body fat, and I highlight this fact because it was the one that shocked me the most, and I think my nutritionist too. Evidently, the upcomming step was to beggin a diet and an excersise routine.

I confess that the forst days it was hard to modify the portions and quantities, but most of all, excercising. At the moment, I was 22 and I didn’t practice any physical activity,  my biggest effort had been to ride a bike against the wind in Liberia, from there, everything has been only about the intentions of practicing something, but nothing else.

I started from zero, I started walking, nevertheless the weeks passed and I started to feel the need of doing something else, during the journey I realized I can make a change and that there were things I’ve always wanted to do but I didn’t have the courage to.

Two weeks ago, I started training with my University’s volleyball team. I’m barely starting and I still have a lot to learn and improve, but the fact of having a space and an activity motivates me to give my best, If I was granted a chance, I want to give my best.

And on the other hand, much more recently I got into my head the feeling for running, I had never done it before, but since now I feel much more confident on myself I decided to try. My roommate is helping me train, It’s been only three days and evidently is a slow process, but its making me feel happy to see that I am capable of doing things that for years would not even cross my mind, and when I would think about it, my only answer would be “never, I can’t do it”.

What has happened since the beginning of this process? It turns out I’ve already lost a percentage of body fat, now I’m at 29.3%; and among other things, I must confess I sleep way better than before, anxiety peaks that were so frequent before have reduced a lot and this has helped me realize that I am capable of a lot of things, If I decide to and I work on it, but in the end I am capable of accomplishing it.

By the way, I realized that by being locked up in monotony I was leaving things on the side that I really enjoyed, so I picked up reading, dedicating time for conversations and I have done an effort to invest in living.

Why do I tell all of this? Because in my journey I have known a lot of people and we frequently keep what we think and feel for ourselves because we don’t think we are capable, because fears often beat us, because sometimes what other people think has a lot of power. I say it like this because, just as I have rise when I’ve fall, I know a lot of other people can do it as well. I tell this because I realice I am not alone in the world and even when anxiety tries to convince me of the opposite, when I rise my eyes and find words of support and love, If I find someone who is having the same need I want to give my love and support back.

Don’t give up, you are still on time
of reaching and start all over,
accept your shadows, bury your fears,
releasing burdens, retake your flight.

Don’t give up that life is that,
continuing the journey,
chasing your dreams,
unblocking time,
releasing burdens and uncovering the sky.

Wine and love exist, it’s true,
because there is no wound time can’t heal,
opening doors and removing locks,
abandoning the walls that protected you.