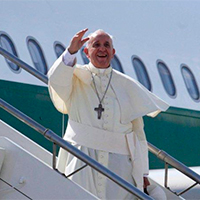 Pope Francis traveled to Ireland to close the World Meeting of Families, though his first address was not given there, but here: on the plane.

The pope wasn't speaking before a crowd, just a TV cameraman: Arturo Anastasio of Rome Reports, who told him he was getting married on September 8 and the Holy Father was surely invited to the ceremony.

“Holy Father, I'm getting married in two weeks. My fiancée and I made this gift for you.”

The invitation. Thank you, Holy Father. Remember the three keywords of marriage: 'May I,' to not intrude, 'Thanks' and 'forgiveness.' If the plates fly, so be it, but before the day is over, make peace because the cold war the next day is dangerous.”

“Thank you, thank you from the bottom of my heart.”

Pope Francis gave them these two rosaries. Arturo has traveled on 10 papal trips with the Holy Father, and it's not the first time he's been given a gift. On another occasion, the pope also signed a photo for him.

“It was fantastic because he made us incredibly excited. He wrote on the photo, 'With my blessing, Francis.' It was a wonderful moment.”

“I was moved when I saw the photo. It was precious. After the marriage proposal and the engagement ring, this was an amazing gift to frame.”

Now, they not only have an autographed photo from the pope, but also a litany of advice for this new chapter in their lives. Who knows? Maybe Pope Francis will accept the invitation and marry the two himself. It wouldn't be the first time, as the the Holy Father already made a surprise appearance at a Swiss Guard's wedding in July.