Learn to pray
Spirituality
Pope Francis' visit to the Shrine of Our Lady of Knock
The Pope entered this Marian Shrine and prayed in front of the Chapel of the Apparition. 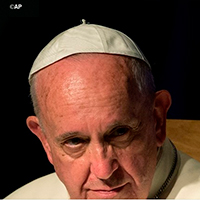 Pope Francis wrapped up in his long white coat touched down at Knock airport on Sunday morning descending the steps of an Aer Lingus plane called St Aidan. In fact, all the national carrier’s aircrafts are given the names of Irish Saints.

He was greeted by hundreds of school children waving Vatican flags and smiling broadly as he patted them on the head.

At the shrine itself people had gathered from early morning with many wearing plastic ponchos in an attempt to shield them from the ever present showers. Many here had been praying for good weather to make up for the rain that had poured down during the visit of St John Paul II nearly 40 years ago.

The power of the Rosary

After greeting the crowds gathered outside, the Pope entered this Marian Shrine and prayed in front of the Chapel of the Apparition, for all the families of the world, then in a touching gesture, he presented the shrine dedicated to Our Lady of Knock, with a golden rosary in acknowledgment of the tradition of the family rosary in Ireland.

In his Angelus address from a specially constructed podium, the Pope prayed that Our Lady, “would look with mercy on all the suffering members of her Son’s family”, especially the victims of abuse committed by members of the Church in Ireland.

None of us, he said, “can fail to be moved by the stories of young people who suffered abuse, were robbed of their innocence and left scarred by painful memories.  This open wound challenges us to be firm and decisive in the pursuit of truth and justice. I beg the Lord’s forgiveness for these sins and for the scandal and betrayal felt by so many others in God’s family.  I ask our Blessed Mother to intercede for the healing of the survivors and to confirm every member of our Christian family in the resolve never again to permit these situations to occur.”