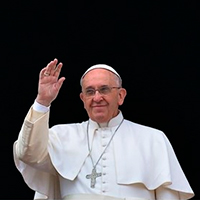 During the papal trip to Ireland, there will be three things to watch for:

Following a devastating report on sexual abuse in the U.S., the pope wrote a letter to all Catholics. In it, he called for prayer and penance, and collaboration to prevent it from occurring again.

Just as the issue is at the forefront of every Catholic's priorities, Pope Francis is traveling to Ireland, one of the countries affected most by abuse and its mismanagement by Church officials. There, the Holy Father will meet with victims, and one wonders if he'll choose to send another message to the Church and the world.

The World Meeting of Families will offer a unique opportunity to reflect on one of the most important documents from the current papacy: Amoris Laetitia. The vigil on Saturday will be the culmination, and the pope will announce the next diocese to host the World Meeting on Sunday.

During the trip, Pope Francis will make an intriguing stop to pray before the relics of an ex-alcoholic. Matt Talbot was a humble warehouse worker who managed to overcome a deep-rooted drinking addiction. After his conversion shortly before the age of 30, he changed his outlook on life and became one of the “saints next-door” whom the Holy Father described in his latest papal document.