Vatican
News
“No one has greater love than this…”
The liturgical feast of St. Maximilian Kolbe occurs on August 14. 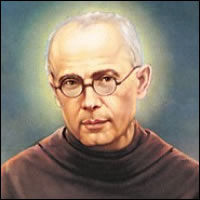 “No one has greater love than this…” – St. Maximilian Kolbe

The liturgical feast of St. Maximilian Kolbe occurs on August 14, the day he was executed by the Nazis at Auschwitz in 1941 with a lethal injection, days after he volunteered to take the place of a death row inmate.

During World War II, Auschwitz, in occupied Poland, had become notorious as the largest of the German Nazi concentration and extermination camps where at least 1.1 million men, women and children died or were killed, around 90 percent of whom were Jews.

However one Catholic priest dared to respond to the might of Nazi evil with the selfless love of the Gospel, thus becoming a martyr who lived total love toward God and man.  He is St. Maximilian Kolbe, a Franciscan priest, one of the victims of Auschwitz.

After the invasion of Poland by Germany in 1939, Fr. Kolbe and his companions were sheltering and aiding some 3,000 Polish refugees in their friary, among whom were 2,000 Jews.   The Nazis closed down the friary in May 1941 and Fr. Kolbe and four companions were sent to the Auschwitz death camp, where they worked with the other prisoners.

When a prisoner escaped from the camp, the Nazis selected 10 others to be killed by starvation in reprisal for the escape. One of the 10 selected to die, Franciszek Gajowniczek, began to cry thinking about his wife and children.

Unable to bear this, Fr. Kolbe stepped silently forward, took off his cap, and stood before the commandant and said, 'I am a Catholic priest. Let me take his place. I am old. He has a wife and children.'  The Franciscan priest pointed with his hand to the condemned Franciszek Gajowniczek and repeated 'I am a Catholic priest from Poland; I would like to take his place, because he has a wife and children.'

His request was granted!