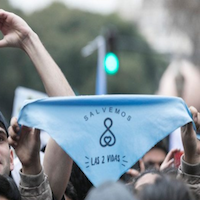 Argentina’s Senate voted on Thursday against legalizing voluntary abortion into the 14th week of pregnancy, rejecting the bill 38 to 31, as the Catholic Church continues to provide assistance to pregnant women in difficulty.

In a victory for pro-life advocates in Argentina, the country’s Senate rejected a bill on Thursday to legalize voluntary abortion into the 14th week of pregnancy.

Hours of heated debate and impassioned pleas ended with a 38 to 31 vote against the measure. The bill had narrowly passed the lower house in July.

Senators from Argentina’s northern regions led the charge against legalizing voluntary abortion, while representatives from the Buenos Aires region and those in the south pushed to pass it.

Ahead of the Senate vote, President Mauricio Macri said he was personally against abortion, but added that the debate itself was “a win for democracy”.

Current Argentine law only permits abortions if the mother’s life is at risk, or in cases of rape.