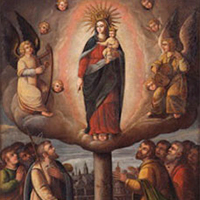 I had the grace to be baptized in the Basilica of Pilar de Zaragoza a scorching July 7, day of San Fermin. In addition to celebrating our awakening to life, we should especially remember our birth to heaven.

I was always very excited to be baptized in the first temple of Christianity in honor of the Virgin Mary, who came in mortal flesh to Zaragoza. That predilection of the Mother of Heaven was not casual, as the Aragonese capital would donate to the Church countless martyrs in the first centuries of Christianity as well as numerous feats in defense of the Faith in centuries to come.

Brief history of the invocation:

As many of you already know, according to an ancient and revered tradition, the Blessed Virgin, while still alive, appeared to the Apostle Saint James the Great in Zaragoza. It was accompanied by angels who brought a column or pillar as a sign of their presence. In the apparition, Our Lady consoled and comforted the Apostle Saint James, to whom he promised his motherly assistance in the evangelization that he was carrying out in Spain, because this nation would be called to a very great evangelizing mission in history.

Since then, the Pilar is considered to be the symbol of the firmness of faith of the Spaniards and of all Hispanics and one of the great Marian sanctuaries of Christianity. Every day of the year at 9 o'clock in the morning, at 12 noon and 8 o'clock in the afternoon, a litany in honor of such an important visit sounds through the public address of the Plaza del Pilar: "Blessed and praised be the hour when Mary Most Holy He came in mortal flesh to Zaragoza. Forever be, forever be blessed and praised. "

Throughout its history the Virgin has rewarded with many graces and even spectacular signs the abundant samples of filial fervor received by her children. One of the most famous is the "Miracle of Calanda", where the Virgin restored the amputated leg to the beggar Miguel Pellicer, in 1637. Many people witnessed the prodigy, with the historical certainty of the notarial certificate that attests it.

During the National Crusade the temple was bombed on August 3, 1936. Four bombs that did not explode were thrown on the Basilica of El Pilar. The projectiles that fell in the temple are exposed to the sides of the Camarín of the Virgin and they integrate the long list of miraculous facts attributed to the Virgin. The pilot of the plane converted to faith by witnessing such an inexplicable prodigy. Curiously, I met the grandson of the person in charge of checking that the bombs were actually loaded.

El Pilar has a close relationship with hispaniards and the evangelization of America, one of the great feats of our country. The Virgin promised that just as El Pilar would always remain firm in that place, faith would not disappear from Spain. Saint Pilar is a symbol of strength in faith, security in hope and steadfastness in love as prayed by the collection of his own Mass on October 12.

My tender devotion for the "Pilarica"

Throughout my life I have felt very strongly this sign of Marian identity that has always accompanied me. A few weeks after my baptism I had very high fevers that happily subsided through the intercession of the Blessed Virgin.

Later, as an adult, I often went to the holy temple to venerate the holy column and pray before the Virgin. I have also kept the Zaragoza custom of going to confession to the Basilica. After my conversion, the Virgen del Pilar was again key. In those moments I went every day to the temple having great consolation of the Mother.

I remember that I bought an image of the Virgen del Pilar. I enthroned her in my room, throwing away all the worldly posters that were not worthy to accompany such a Lady. From the image emanated a sensitive force as if it were magnetized and from my eyes abundant tears for my sins. These sensitive graces covered me like a cloak in those blessed days of my conversion.

As gratitude I wanted to honor the Virgin being Knight of the Pillar, association where around the Holy Column we venerate our exalted Patroness and work to extend their cult and devotion.

If you pass through Zaragoza do not forget to go through the Pilar and ask the Virgin fortress after venerating the Holy Column and also ask for the Faith of Spain and America.