Family
Parenting
Work or Children?
Continue with pregnancy and endanger your own work? 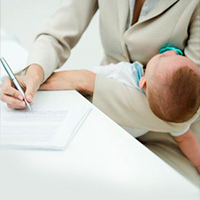 Sometimes the question arises: to continue with pregnancy and endangering one's work? A tremendous question, because it is placed on the horizon of abortion. A dramatic question, because there are societies where a woman can lose her job if she has a child.

But the existence of a child, of any child, either in good or bad times, is never a threat; but an opportunity and a challenge. An opportunity to readjust one's life from affection and respect to that little human being who lives in the bosom of his mother. A challenge, because everything changes, although sometimes the horizon is dark, or even the terrible threat of losing the job seems near.

While the "culture of discarding", so often denounced by Pope Francis, facilitates the terrible gesture of abortion, the culture of love, of welcome, of justice, of respect, of generosity, gives strength to the mother, to the father, to say "yes" to that child that has begun to exist.

That same culture of love will fight for companies to change their mentality and not see women who become pregnant as an obstacle to "benefits", but as a moment of growth in the spirit of authentic solidarity and respect for justice towards the mother and towards her son.

Work or children? It is a malevolent question, typical of societies that are afraid of life, when we need societies open to hope. A question that will almost disappear if there are more men and women who love and recognize the dignity of being more defenseless among humans: the unborn child