Vatican
Documents
Pope Francis makes surprise visit to elderly woman in Rome
Demonstrating once again his compassion and pastoral concern for those in need. 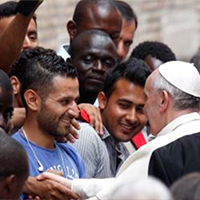 Demonstrating once again his compassion and pastoral concern for those in need, Pope Francis makes a surprise visit to a sick, bedridden lady in Rome.

Pope Francis this weekend visited an elderly lady, whom he knows, in Rome’s Salario district on the Via Alessandria.

The Pope arrived late on Saturday afternoon aboard his blue Ford Focus to pay a visit to the lady who is bedridden and had repeatedly invited the Holy Father to her home.

He was accompanied by only a few Vatican Gendarmes and several plainclothes Italian police officers, who waited outside as the Pope entered the house.

Pope Francis stayed with the lady for around an hour, and was greeted as he left by a small crowd of local residents who had recognized his blue car.

The Pope greeted the well-wishers, shaking hands and hugging them affectionately. He took a moment to play with a child, as a young woman sought to hold back tears of joy.

A sick man who lives in the same residential complex also made his way outside to receive the Holy Father’s blessing and words of comfort.

After greeting everyone present, Pope Francis blessed them and returned to the Vatican in his inconspicuous Ford Focus.