Learn to pray
Spirituality
Rest of the soul
Who has not felt at some point the need to rest? 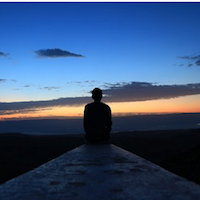 Who has not felt at some point the need to rest? After a job or a prolonged study, a few hours of sleep or a few days of vacation come in handy, and a concentration of the mind on a demanding goal is offset by the distraction of sport or a hobby. If we pay close attention to our life, a deeper rest is also necessary; the one that needs the soul, that is not obtained only with vacations or distractions and that would take away the weight of so much inner restlessness to us ... That’s it! The rest that Jesus promised his apostles:

I hope that these reflections will help us to better appreciate the words of Christ, going through some scenes of the Scripture. I also hope that these words and these scenes can illuminate and guide our own life.

I. We see first the rest of the promised land.

This is what the Greek Bible calls "katapausis". After so many centuries of forced labor in Egypt, after a long and heavy road in the desert for forty years, after battles and battles with the people of Canaan, the kingdom of Israel is finally established. David and Solomon reach a period of peace. Even a temple is built in the heart of Jerusalem. The longed wait is thus fulfilled, and history is resolved with the rest of the chosen people and of God in their midst. Then King Solomon pronounces these words:

"Blessed be the Lord, who has given rest to his people, according to what he had said; none of the promises made through Moses, his servant, has failed ... (1 Re 8, 56)”

The Lord has promised us a goal at the end of the road. The struggle and the work will not be in vain. Although it seems that the fatigue is lengthened, and we do not see our hope fulfilled, in the end God will fulfill his promises. He will complete his work in our hearts and, once finished, we can rest in him. We just have to stay united to his Word with living hope. We can not allow our hearts to harden with time and worry, as happened to Israel in the desert (Ps 95, 8-11). Every day we have to renew our intention to stay on the path of God, if we want to finally enter the resting place that He has reserved for us.

But Jesus wants to say something a little different. He speaks of a rest that the evangelists describe with the word "anapausis". It is about the serenity that opens us to a new day and that is perceived in the silence of each dawn. It is the repose of the new creation that has achieved dying on the cross, going down into the underworld and rising from the tomb. It was not in vain so much fatigue. It did not end in the silence of death, but it gave way to a new life.

Only he who follows Christ by taking the yoke of the cross comes to possess this wisdom (Sir 51, 34-35). It is the rest of one who renews his strength directly at the source. It is the rest that fills the mind to start over again, no matter what has been suffered before. Every day we can resume the struggle, because the blood of Christ regenerates us without ceasing. Then the promises of the prophets about a God who lives in the midst of his people are fully fulfilled (Is 66,1). He himself spills on his Church all the vitality of the water on the parched earth, the same vitality that heals the wounds and gives vigor to the tired members.

San Jerónimo, moreover, unfolds the meaning of this word and translates it in two different ways. The first time he talks about the rest he restores. In Latin we speak of "refectio" (Mt 11, 28), that is, of a re-making, as we have seen above. But soon after we read the word "requies" (Mt 11, 29), which describes the truce at the end of a war. It is the rest after a long tension, the end of a great problem that we seek to solve. At last the goal has been reached, and now the soul is satiated ...

This rest is very similar to the promises fulfilled. However, it is not only the work of God that comes to an end in us, but also our heart that has found what it was looking for with such restlessness. Because the true promised land, that which makes the deepest part of the soul rest, is neither a place nor a situation without problems: the promised land is a Face, it is a divine Person who has become flesh and who has lived among us.

Christ is the authentic rest for our souls. Let us take, then, his invitation: "Come to me ...". How to go to Jesus? He proposes some concrete steps:

..learnfrom me, that I am meek and humble of heart ...

And you will find rest for your souls. "