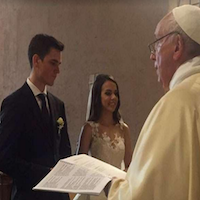 Pope Francis surprised wedding guests Saturday when he unexpectedly celebrated a marriage being held at a small chapel in the Vatican Gardens.

“Look who came as a surprise! Pope Francis is always surprising!” said Brazilian Fr. Omar Reposo on his Instagram account.

The wedding - between Luca Schafer, a member of the Swiss Guard, and Letícia Vera, a former employee of the Vatican Museums, took place in the Church of St. Stephen of the Abyssinians, just outside St. Peter’s Basilica in Vatican City.

Sources close to the couple told ACI Digital, CNA’s Portuguese language sister agency, that only the bride and groom know that Pope Francis was going to preside over the wedding. The pope’s arrival surprised the wedding guests, and the priests who concelebrated the wedding.

According to Vatican Media, the pope preached about three verbs that can help couples to experience the fullness of marriage: “to begin,” “to stop,” and “to resume the journey.”

This was not the first time that Pope Francis celebrated a wedding at the Vatican. In September 2014, the pope presided over the marriage of 20 couples in St. Peter’s Basilica and in July 2016 he did the same for a deaf couple in the chapel of the Casa Santa Marta.