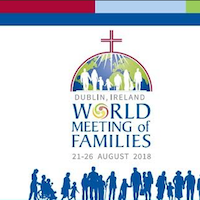 WMOF in Dublin: All papal events booked out six weeks in advance

Organizers for the World meeting of Families (WMOF) say excitement is growing ahead of Pope Francis’ visit to the gathering with all tickets now booked out including for the closing Papal Mass in Dublin’s Phoenix Park.

Brenda Drumm,  Media Director of the World Meeting of Families (WMOF),  says that for many people Pope Francis “has become the Pope of the family” and this helps explain why all tickets have been booked out for the WMOF events including half a million tickets made available for the closing Papal Mass in Dubin's Phoenix Park.

In an interview with Vatican News, Drumm said “anticipation and excitement is growing” in Dublin in the run-up to the 6-day gathering (from August 21-26) and is part and parcel of the steady momentum that began to build up after the announcement that Pope Francis would be attending the final 2 days of the WMOF on August 25 and 26.

"The Pope of the family"

Drumm explained that many Catholics like what the Pope is already saying about family issues and his message resonates strongly with them, whether they are old or young.

“I think for a lot of people he has become the Pope of the Family........they like his style, they like his message," she said.

"He gets family life"

Drumm said the Irish people also can see and appreciate that Pope Francis has a clear understanding about the daily realities of family life with all its ups and downs.

“He gets family life ..... the joys but  also the challenges .... that sometimes plates can fly and children bring headaches," she said.

Another plus in the eyes of the people said Drumm is that Pope Francis “speaks up for families, speaks up for life” and she described how in Ireland “young people in particular are very very encouraged by his messages around social justice issues” such as migrants and refugees or caring for the environment.