Vatican
News
Official Video "Here I Am, The Servant of The Lord"
WYD Panama 2019 releases an international version of the hymn “Let it be done to me according to your word” 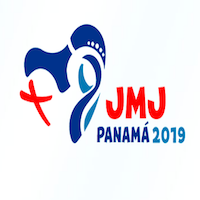 Panama, July 4, 2018. The Forty-Eight Bread and Wine Dinner, an event held every year to raise funds for the major Seminary of St. Joseph, was the setting chosen to launch the international version of the official theme song of the 34th World Youth Day, Panama 2019, recorded in the five official languages (Spanish, English, French, Italian and Portuguese).

"World Youth Day is an international and multilingual event, so the theme song will be sung in several languages because we cannot forget that although most of the pilgrims are expected to be Spanish speakers, many also will be Portuguese, English, Italian and French speakers." said Pedro Guevara Mann, Artistic Director of WYD Panama 2019.

The hymn composed by the Panamanian Abdiel Jiménez will be sung and heard in all five continents. Therefore, to achieve an adaptation that was honest to Jiménez's music, Guevara Mann contacted several internationally recognized Catholic composers to help with translations.

The Italian version was adapted by the composer Marco Frisina, who is best known for his composition “Jesus Christ You Are My Life”, which was premiered at WYD Rome 2000, and has perhaps become the extra-official anthem of all WYDs.

The Portuguese version was translated by Ziza Fernandes of Brazil. The English version was worked by Fr. Robert Galea of Australia, and the French version by the talented musicians and composers of the Chemin Neuf Community in France.

Once the versions in each language were approved, Guevara Mann worked with the arranger of the theme song, Aníbal Muñoz, to achieve the perfect mixing. The international version was recorded entirely in Panama, using the talents of Panamanian Catholic artists who had to polish their knowledge of these languages.

The choir members who sang the international version of the theme song are: Gabriel Díaz, Marisol Carrasco (Spanish), Lucia Muñoz, Pepe Casis (Italian), Naty Beitia (French), José Berástegui and Eduviges Tejedor (English) from Panama, and the Portuguese by Erick Vianna and Kiara Vasconcelos of the Shalom Community of Brazil, who are in Panama working for WYD 2019.

Along with the launch of the international version of the theme song of WYD Panama 2019, there was a presentation of the video that was recorded in different dioceses of Panama.