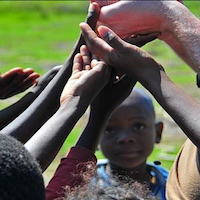 Seven days of giving to others ‘were filled with so much joy it was hard to believe I was at an orphanage,’ said a New Yorker

Most young people working in New York City have very limited free time and very few vacations days. There is a reason it takes over three hours on most Fridays to get out to the Hamptons on Long Island or down to the Jersey shore in the spring and summer months: Everyone else is heading to the beaches, too, for a bit of fun and much-needed respite.

Yet Jen Arena, a 26-year-old who works in sales at a technology startup in the Big Apple, had other plans. For the second time in the past few years, this graduate of Fairfield University in Connecticut gave up part of her vacation this summer to travel to Haiti to do what she loves most: serving the poor and marginalized of society. I asked her to share her thoughts about her recent trip — and she didn’t disappoint.

“Haiti will always be a place that has captured my heart,” she told me. “It’s hard to think about Haiti without thinking about death, despair, and the natural disasters that seem to hit such a beautiful country much too often. Time and time again, the people of Haiti have shown me that even in the darkest of places, when you have Christ at the center, you have hope.”

I was fortunate enough to spend time at Kay Mari, an orphanage in a small village nestled in the beautiful mountains of Haiti. It’s run by the organization Haiti180, started by a man named Sean Forrest. The group works to keep the 35 children fed, clothed and happy, and to keep them spiritually filled as well.

During the mission I had the chance to be with smart, beautiful and loving children, meet and worship with the villagers, pray with and learn from other missionaries, and even help build a house. Throughout my seven days in Haiti, God revealed himself in so many ways.

Kay Mari was filled with so much joy that at times it was hard to believe I was at an orphanage. The depth of the staff’s love for the 35 children was immediately apparent; they not only made sure they were fed and clothed, but always watched for the kids to make sure they were where they were supposed to be.

She also explained that the children began and ended every day by “praying together in a beautiful chapel, and this special time with God clearly spilled into their everyday life.”

They were kind and gentle children who loved to laugh and play. The older children always helped with the younger ones, changing them, feeding them and picking them up when they cried. It is an not merely an orphanage but a home, a place where these children can grow up with a family that loves them and loves God.

One of our practical goals was helping to build a home. The villagers were extremely kind and generous. For example, they gave us food from the meager rations they were having for lunch. We experienced the villagers’ sincere love for God during a special liturgical service on the mountain. It moved my heart profoundly.

“The villagers walked for miles up the mountain in the scorching heat,” Arena explained, “yet they were all singing, dancing, and praising God with enthusiasm.”

They were focused on thanking God for the many gifts He had given them. This made me ponder how some of us, who have so much, are never fully satisfied and how people with so little could be so happy just by having God in their lives. Haiti180 has made a huge difference in the lives of these children and the rest of the village. They have built a quality school, a medical clinic, a nursing home — and continue to lend a helping hand to all who need it.

This mission, as with most missions, has probably helped me more than I could possibly help the Haitians during those seven days. It has allowed me to see the face of Christ in the 35 children with whom I had the privilege of laughing and playing, in the staff who prepared three meals a day for us and drove us around each day, and in the villagers who shared their food when they had none. It reminded me that being thankful goes far beyond possessions, which are merely material objects.”

Why not include a mini mission of some kind in the remaining weeks of your summer schedule or getaway plans? You will not regret having given back a little to God and to others.

We all need to get away and have a little fun, but Jen Arena clearly demonstrated the value of leaving one’s comfort zone to touch those who have a special place in the heart of God.