Vatican
News
May the Holy Spirit unite what is still divided.
The Pope expressed his hope for a future in which all divergences will be overcome. 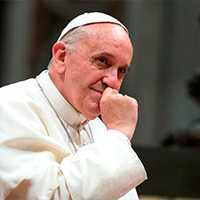 Pope to Lutherans: 'may the Holy Spirit unite what is still divided'

Pope Francis urged members of the German Lutheran Church, whom he received in the Vatican, to continue walking the path to unity.

Receiving a Delegation of the German Evangelical Lutheran Church in audience, Pope Francis on Monday recalled his positive 2016 visit to Lund in Sweden to mark the Common Commemoration of the Reformation.

Pointing out that “for the wounds of the past” the event could have provoked controversy and hatred, he said that instead it took place in a spirit of fraternal communion highlighting the fact that the last fifty years have been characterized by a “growing communion”.

“Thanks to the work of the Spirit, fraternal meetings, gestures based on the logic of the Gospel rather than human strategies, and through the official Lutheran-Catholic dialogue, it has been possible to overcome old prejudices on both sides” he said.

Ecumenism continues to mark our path

The Pope expressed his hope for a future in which all divergences will be overcome and said “the Common Commemoration of the Reformation has confirmed to us that ecumenism will continue to mark our path”.

He noted that full Christian unity is increasingly becoming a necessity and a desire “as shown by the various prayers in common and the many ecumenical meetings that took place last year in the world”.

The Holy Spirit will show us the steps to be taken

“Let us not forget to start from prayer, he said, so that it is not human projects that indicate the way, but the Holy Spirit: He alone opens the way and enlightens the steps to be taken”.

The Pope noted that the Spirit of love cannot but push us on the paths of charity and that as Christians, Catholics and Lutherans we are called to love each other, to strive together to alleviate the suffering of those in need and of those who are persecuted.

“The sufferings of many of our brothers and sisters who are oppressed because of their faith in Jesus is a pressing invitation to reach an ever more concrete and visible unity amongst us” he said.

Francis urged all Christians to support each other in the journey towards unity, also by carrying forward theological dialogue.

He said that dialogue cannot advance if we remain still, so we must continue to walk patiently together “under the gaze of God”.

He pointed out that themes such as the Eucharist and ecclesial ministry call for deep reflection, but at the same time he said that ecumenism is not an ‘elitist’ reality but must involve as many brothers and sisters as possible and nurture a growing community of disciples who pray, love and proclaim.

Pope Francis concluded his address invoking the blessing of the Lord so that “the Holy Spirit descend and unite what is still divided”.