Daily Gospel
Liturgical Cycle B
On Sitting and Serving
Mark 10:32-45 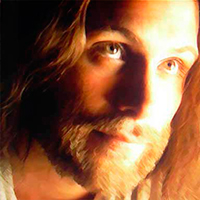 The disciples were on the way, going up to Jerusalem, and Jesus was walking ahead of them; they were amazed, and those who followed were afraid. He took the Twelve aside again and began to tell them what was to happen to him, saying, "See, we are going up to Jerusalem, and the Son of Man will be handed over to the chief priests and the scribes, and they will condemn him to death; then they will hand him over to the Gentiles; they will mock him, and spit upon him, and flog him, and kill him; and after three days he will rise again." James and John, the sons of Zebedee, came forward to him and said to him, "Teacher, we want you to do for us whatever we ask of you." And he said to them, "What is it you want me to do for you?" And they said to him, "Grant us to sit, one at your right hand and one at your left, in your glory." But Jesus said to them, "You do not know what you are asking. Are you able to drink the cup that I drink, or be baptized with the baptism that I am baptized with?" They replied, "We are able." Then Jesus said to them, "The cup that I drink you will drink; and with the baptism with which I am baptized, you will be baptized; but to sit at my right hand or at my left is not mine to grant, but it is for those for whom it has been prepared." When the ten heard this, they began to be angry with James and John. So, Jesus called them and said to them, "You know that among the Gentiles those whom they recognize as their rulers lord it over them, and their great ones are tyrants over them. But it is not so among you; but whoever wishes to become great among you must be your servant, and whoever wishes to be first among you must be slave of all. For the Son of Man came not to be served but to serve, and to give his life as ransom for many."

Introductory Prayer: Once again, Lord, I come to you to pray. Even though I cannot see you, I trust that you are present and very much want to instruct me in your teachings. In the same way that you demonstrate your love for me by spending this time with me, I want to express my love for you by dedicating this time to you with a spirit of faith, confidence and attention. Here I am, Lord, to listen to you and respond with love.

Petition: Lord, help me imitate your example of loving service.

1. Jesus Sets His Face Toward Jerusalem: Jesus is walking ahead of his disciples, firm and determined. A few of those following him are growing uneasy, but James and John seem not to grasp the seriousness of the situation. Jesus is accompanied, but in a certain sense, he is alone. Again and again he has tried to explain to his followers that his mission will lead him to be rejected and mocked and eventually to suffer the cruelest of deaths. But they seem incapable of grasping the message; from their vantage point, none of this makes any sense. At times we, too, hear Christ’s words about taking up our cross daily and losing our life for his sake, and we are either terrified at the prospect or its meaning eludes us. Jesus, however, continues inviting us to follow in his footsteps and carry our daily crosses with our eyes fixed on our heavenly home, the New Jerusalem.

2. The Ambitions of James and John: James and John were hand-picked disciples of the Lord. Jesus had often allowed them to accompany him when he went off alone to pray. They both felt a deep affection for Our Lord, and so it is not surprising that they wished to be near him when he entered into his glory. Jesus doesn’t reproach them for their petition even though it comes at a moment when his heart is burdened with deeper concerns. Rather, Jesus invites them to reflect on the consequences of their request. To be on Jesus’ right and left in his glory means to pass through a similar trial as the one he must soon undergo –– they would have to be situated on his right and left on the day he is lifted up on the cross. Jesus also invites us to “seek the things above” and place our ambitions on heavenly sights and not earthly glory. If our love for Jesus is true, then it must withstand the test of trial and suffering.

3. The True Meaning of Authority: Most of us prefer to command than obey. Ambition quickly leads to rivalry and bitter feelings, as happened to the twelve apostles. Jesus quickly intervenes and gives us a valuable lesson on the meaning of authority, a lesson to be taken to heart. Authority of any kind has only one purpose: service. Do I view the authority that I have been given as a service? Am I more concerned about being obeyed –– immediately and exactly –– than about setting an example for others? How can I be more like Jesus in exercising my authority? Do I realize this is a specific way of picking up my cross and following after Jesus?

Conversation with Christ: Jesus, help me to be zealous for the things of above. Do not allow my heart to be ambitious but rather be meek and gentle like yours.

Resolution: I will seek to serve others no matter who they are.