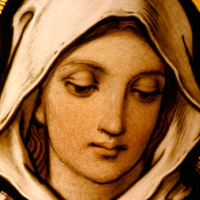 Our Lady of CaravaggioAlso known as: Nostra Signora di Caravaggio

Title given to the Blessed Virgin Mary who appeared in an apparition on 26 May 1432 in the countryside outside Caravaggio, Lombardy, Italy. Giannetta de’ Vacchi Varoli was cutting hay in a field when the Virgin appeared. Mary requested penance from and a chapel built by the locals. A new spring of healing water appeared in the hay field. The apparition anniversary became a day of pilgrimage to the shrine of Santa Maria del Fonte built at the site, and devotion to the Madonna of Caravaggio spread through the region and eventually around the world.

In 1879, Italians from Lombardy built a chapel for their settlement in southern Brazil. As it was the only sacred art that any of them possessed, they dedicated the chapel to the Madonna di Caravaggio. Today the shrine hosts over a million pilgrims annually.