Vatican
News
Be Bishops for your flock, not for your career
Pope Francis says he prays all bishops follow the example of the Apostle Paul with his obedience to the Holy Spirit- 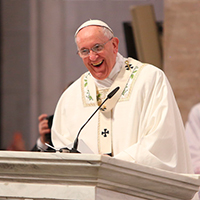 Pope Francis says he prays all bishops follow the example of the Apostle Paul with his obedience to the Holy Spirit and his love for his flock. His words came during his homily at Mass celebrated on Tuesday morning in the Vatican’s Santa Marta residence.

Pope Francis focused his reflections on the day’s reading from the Acts of the Apostles where Paul, “compelled by the Holy Spirit,” takes his leave from the Church Elders at Ephesus to go to Jerusalem. “It’s a decisive move, a move that reaches the heart, it’s also a move that shows us the pathway for every bishop when it’s time to take his leave and step down,” he said.

Retracing the biblical account of how Paul summoned the presbyters of the Church at Ephesus to take his leave of them, Pope Francis noted how the Apostle made an examination of his conscience, telling the Elders what he had done for the community and leaving them to judge his work. Paul seemed “a bit proud,” said the Pope, but in actual fact “he is objective.”  He only boasts about two things: “his own sins and the Cross of Jesus Christ which saved him.”

The Apostle is listening to the Holy Spirit

Describing how Paul feels “compelled by the Holy Spirit” to go to Jerusalem, Pope Francis said: “This experience by the bishop, the bishop who can discern the Spirit, who can discern when it is the Spirit of God speaking to him and who knows how to defend himself when spoken to by the spirit of the world.”

In some way, the Pope said, Paul knows that he is going “towards trials, towards the cross and this recalls for us Jesus’ entry into Jerusalem, doesn’t it?”

The Apostle, he went on, “is obediently offering himself up to the Lord. That (expression) compelled by the Holy Spirit. The bishop who always goes forward but according to the Holy Spirit.  This is Paul.”

His farewell: watch over the flock

Turning next to Paul’s farewell words, Pope Francis noted how Paul takes his leave amidst the pain of those present by giving them advice in a testament which is not a worldly testament “about leaving belongings to this person or that person.”

Paul’s great love, said the Pope, “is Jesus Christ.  His second love is for his flock. Take care of each other and of the entire flock. Keep watch over the flock: you are bishops for your flock, to take care of it and not in order to advance your ecclesiastical career.”

Noting how Paul entrusted the Elders to God, knowing that He will take care of them, the Pope stressed that the Apostle spoke of having no desire to have any money or gold for himself. He described Paul’s testament as “a witness, as well as an announcement and a challenge.” This was no worldly testament, said Pope Francis because Paul had nothing to leave to others, “only the grace of God, his apostolic courage, Jesus Christ’s revelation and the salvation that Our Lord had granted him.”

The Pope thinks about when his time will come

“When I read this, I think about myself, he declared, “because I am a bishop and I must take my leave and step down.”

He concluded his homily with a prayer: “I am thinking of all bishops. May the Lord grant all of us the grace to be able to take our leave and step down in this way (like Paul), with that spirit, with that strength, with that love for Jesus Christ and this faith in the Holy Spirit.”