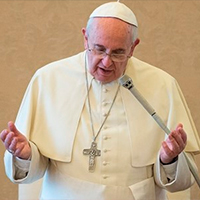 In his homily at Mass, Monday morning, Pope Francis urged Christians in their vocation to live their friendship with Jesus, whose love, he said, is faithful, even to those who betray Him.

We have received our friendship with Jesus by “lot”, that is by “destiny”, not by “chance”, and our vocation is precisely to remain friends of the Lord.   Pope Francis made the exhortation in his homily at Mass Monday morning at the Vatican’s Casa Santa Marta residence.

The Pope based his reflection on the word “lot” that occurs a few times in the day’s Mass readings and a prayer on the feast of St. Matthias, who was chosen by lot to fill the place of Judas Iscariot who betrayed Jesus.

Our destiny – friendship with Jesus

The Pope said we have received this gift of friendship with the Lord as our destiny,  and our vocation is to live as His friends.

All Christians, the Pope said, have received this gift of friendship, which the apostles received to a “stronger” degree.   It is a gift that the Lord always cherishes, faithful to this gift.

Jesus’ friendship even toward those who betray

Many times, however, the Pope explained, we are not so faithful and distance ourselves from Him "with our sins, with our whims" but Jesus is “faithful to His friendship".

In the day’s Gospel, he said, Jesus no longer calls us "servants" but "friends" and keeps His word until the end because He is faithful.  The last word to Judas before his betrayal, the Pope recalled, was "friend" and not “get out”.

However Judas, the Pope pointed out, chose his new destiny freely, distancing himself from Jesus. The Pope called this apostasy – when a friend turns into an enemy, indifferent or a traitor.

“Remain in my love”

The Pope recalled the election of Matthias in the Acts of the Apostles where he was chosen by lot to be a “witness of the Resurrection", "a witness of this gift of love" of Jesus who shares with His friends the secrets revealed to Him by the Father.

Even those who distance themselves from Him, the Pope said, Jesus always awaits, faithful to his friendship.  The Pope thus urged Christians to ask Jesus for the grace to remain in His love, in his friendship.