Christian humanism
Humanism in christianity
What you must ask from religions?
Before any religion lie two questions that cannot be left aside 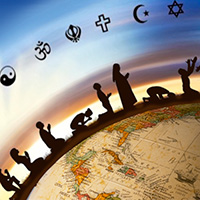