Vatican
News
Strengthened by Christ's Passover
I can do all things in him who strengthens me. 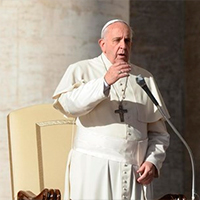 Audience catechesis on Philippians 4:12-13: “I can do all things in him who strengthens me”. Through our Baptismal anointing we receive the strength needed for the spiritual struggle.

Pope Francis continued reflecting on the Sacrament of Baptism during the catechesis portion of the Wednesday General Audience. He focused on the anointing with the oil of catechumens which is part of the Rite of Baptism.

Faith is a response to the Gospel

Those who request Baptism have responded to the Gospel which has prompted them to believe, the Pope said. They have learned how to listen to Jesus’ teaching and works. They experience the thirst of the Samaritan woman. Their eyes are opened like the blind man. They come forth from the dead like Lazarus.

Those who approach the baptismal font are accompanied by the entire Church. This is concretely expressed with the Litany of the Saints before the exorcism and anointing with the oil of catechumens at the beginning of the Rite of Baptism. “They are gestures that, since ancient times, assure those who are preparing to be reborn as children of God that the prayer of the Church assists them in the fight against evil”, Pope Francis said.

Pope Francis reminded those present that Jesus “fought against and cast out demons to manifest that the kingdom of God had come” (cf Mt 12:28). His victory over evil is a clear sign of his lordship. Through Baptism, which is not magic but a “gift of the Holy Spirit”, Jesus gives us the ability “to fight against the spirit of evil”. Pope Francis cited the Baptismal Rite: “God sent his Son into the world to destroy the power of satan and to transfer man from darkness to the kingdom of infinite light”.

The Baptismal candidates receive a second anointing on their chest. Pope Francis explained that long ago, “fighters would cover themselves with oil in order to tone their muscles and in order to more easily escape their enemy’s grasp”. Unpacking this sacramental sign, Pope Francis concluded his catechesis saying that the Christian life is one long, tiring struggle against evil. But we are accompanied by “Mother Church who prayers that her children, regenerated by Baptism, might not succumb to the snares of the evil one, but might conquer by the power of Christ’s Passover.” Therefore, “we too can repeat with the faith of St Paul: “I can do all things in him who strengthens me” (Phil 4:13).