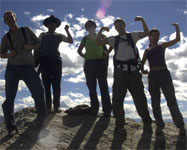 Fraternities and sororities are widely known for two things on a college campus.

These communities, collectively known as Greek life, are known for attracting some of the highest achieving and most involved students. Some of the world’s most influential leaders, including numerous U.S. presidents, 40 Supreme Court justices, a majority of the members of Congress, and 43 out of 50 of the world’s most powerful CEOs were once involved in Greek life during their college years.

But there is a flipside: Anyone who has been to college, or has seen movies about American college life, knows the stereotype of fraternities and sororities as the powerhouses of the party scene and hookup culture on a college campus.

Studies have shown that Greek college students are more likely to binge drink than their non-Greek peers, and are also twice as likely to engage sexually with someone without their consent.

It is within this intense culture of both achievement and partying that missionaries with the Fellowship of Catholic University Students (FOCUS) embed themselves, building friendships with Greek students and inviting them to bible studies, Mass, and a relationship with Christ.

According to their mission statement, FOCUS “is a Catholic collegiate outreach whose mission is to share the hope and joy of the gospel with college and university students...FOCUS missionaries encounter students in friendship where they are, inviting them into a personal relationship with Jesus Christ and accompanying them as they pursue lives of virtue and excellence.”

FOCUS’ main methods of outreach include bible studies, one-on-one student-missionary mentorships known as discipleships, mission trips, and other events. Within the organization, there are subgroups designed to reach more specific groups of students - such as FOCUS Greek for Greek students, or Varsity Catholic for student athletes.

The ultimate goal is to unite all students together at the Catholic Church, Moran said, but FOCUS Greek (and other subgroups) “helps expose (students) to others in Greek life who are experiencing the same things, and helps them to have a community of people striving for faith within the Greek community.”

Moran has worked with FOCUS Greek on two different college campuses in the South. She said that while students in the South are fairly open to talking about Jesus, it can be a challenge to convince Greek students to prioritize their faith in their already-busy schedules.

“Naturally they’re all very strong leaders and involved not just in their house but in student government and other organizations on campus, and they have to have a certain GPA to be in a sorority or fraternity, so time is very limited,” she said.

Ashley Summerford was a nursing student and a member of Chi Omega sorority at the University of Alabama when she was first invited by friends to join Moran’s bible study.

While she wasn’t living according to her Catholic faith at the time, Summerford said that Moran’s friendship and bible study transformed her outlook on how she could live as a Catholic on a college campus.

“FOCUS helps us prioritize God into our college schedule and...talk to other college students about God without feeling uncomfortable,” she said. “It’s been really helpful to get students together to talk about God and how to live out your faith on a day-to-day basis.”

Now a senior, Summerford is putting her nursing career on hold for now and will join FOCUS as a missionary, where she hopes to continue to do more outreach with Greek college students.

“I’m excited to help college students live out their faith...because I needed that when I was in college,” she said. “Becoming a part of FOCUS Greek taught me way more (about living as a Catholic) than I would have ever been able to learn on my own.”

“It just leverages what’s already in place,” he told CNA. “It’s a college-based ministry so the ministry looks at how the college campus is structured and it sends its missionaries strategically into these places as well. It acknowledges that the Greek world is really big on campus so it’s kind of like St. Paul, becoming all things to all people.”

Greek students, while they might not be in the most morally virtuous environments in their sororities or fraternities, are typically highly committed and loyal people, which are natural virtues that can be built upon in the Christian life, Sanchez said.

“A lot of Greek students go all out for their fraternity or sorority - they wear the letters, they go to the meetings, they’re committed to showing up to all the events, they’re committed to recruiting...and they’re contagious as well, they want to share what they have and bring other people to it, which is just a very natural foundation to build discipleship,” Sanchez said.

This year, Sanchez also got to serve as the master of ceremonies for a Legacy conference, the first conferences offered by FOCUS specifically for Greek students.

“It was for all Greek students but especially those on the fringe,” Sanchez said, “so it was cool because students who wouldn’t necessarily come to other conferences felt like this was a true open door. We had a lot of students who hadn’t gone to a bible study all year, had never gone to a conference, be open to coming.”

Summerford also attended a Legacy conference, and she said it was inspiring to be surrounded by Greek students who were all seeking God in some way.

“Just looking around when we’re in adoration and seeing other college students on their knees praying and realizing that you’re not alone when you’re living out your faith is really cool,” she said, “and I think that the conferences do a really good job of teaching us but also bringing us together.”

While Greek students often have the natural virtues of leadership and commitment, Sanchez added that FOCUS missionaries also address with their students what they call “The Big Three”: chastity, sobriety, and excellence.

“Obviously it can be a stereotype, but it’s also a reality that when you have a whole bunch of men or women living together there can be a lot of partying, drinking, the hookup culture, just really poor relationships in general,” Sanchez said.

There’s also the tendency to prioritize Greek life above all other commitments and to give in to moral temptation in order “to fit in, rather than to follow the relationship with the Lord,” Sanchez said.

But once Greek students start becoming friends with missionaries and seeing the fruits of the Gospel in their houses, they can become some of the most powerful evangelizers, Sanchez added.

Sanchez said that one of his students was leading a bible study in his fraternity, and one day realized that fraternity’s president, vice president and recruitment chair were all a part of his study.

“He started to realize - wow, if I really share the Gospel with these guys, it can change the entire culture of this fraternity from top to bottom and start to create good men who desire to follow the Lord,” he said.

“So it just clicked with him that once he started to really live for the Lord and allow the Lord into these relationships that he already had with these men, it would completely change the culture of the fraternity for God.”

“Once students in fraternities and sororities are reached, they just have such strong natural virtue and personal drive, that once they do have an encounter with the Lord, they can become huge witnesses on campus.”